I give my dad a heart attack when I pass the ball out, says Arsenal keeper Aaron Ramsdale – as stats back up fears

AARON RAMSDALE cannot wait for the first airing of the new Arsenal documentary — because it might show the public that being a footballer is not a bed of roses.

England star Ramsdale is a central figure in the behind the scenes series All or Nothing: Arsenal which launches on Prime Video on Thursday.

And he hopes the warts- and-all footage of life at the Emirates will prove just how much manager Mikel Arteta’s players have had to put up with.

The goalkeeper, 24, said: “Being a footballer is one of the best jobs in the world — but at the same time it’s also one of the worst.

“Don’t get me wrong, this isn’t me asking everyone to feel sorry for us, yet I hope this programme will show how hard it is.

“All the time spent away from kids and families, all the constant travelling and living out of a suitcase. 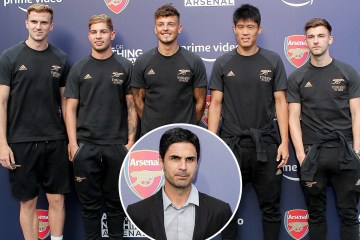 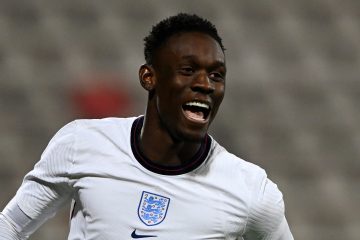 “The next, you lose against a team you shouldn’t lose to — and suddenly it’s all doom and gloom.

“I just hope that the supporters get to see we are only human.

“You see us enjoying ourselves but also the times when we are suffering together.

“Everyone thinks football is easy, you’re on the pitch for two or three hours and then you go home. But it’s not like that.

“You’re travelling 24-7, you’re in the gym, you’re having treatment for injuries. I’m not asking for sympathy — it’s really just the facts of the job.”

Ramsdale’s eyes were opened to the reality of life at a club like Arsenal before he even completed his £30million deal from relegated Sheffield United last summer.

He revealed: “I had a lot of online negativity, idiots telling me not to sign, threats trying to scare me and saying, ‘We know where you live’ and stuff like that.

“So pretty quickly I turned off all the notifications on social media from people who I don’t follow back.

“They can still try to message me but it’s only my friends and people who are important to me who can contact me.

“My mum and dad are on social media but don’t really know what they are doing, so it’s quite easy for them to type ‘Ramsdale’ into Twitter and end up on a page where there’s lots of negativity and abuse.

“So turning off the notifications has definitely made me feel safer — but it was also better for my family and it’s stopped them from getting upset.

“As much as I love the fans, the people I need to impress are the manager, the coaching staff and my team-mates.”

Yet Ramsdale did not take long to figure out that the Twitter trolls are a world removed from the Arsenal regulars who have quickly taken the keeper to their hearts.

He added: “I got a great reception in my first game in the Carabao Cup at West Brom.

“So I very quickly realised the difference between true fans who travel to places like Birmingham on a Wednesday — and some idiot behind a keyboard who just wants to make comments about footballers because they think they can do better.”

One of the stand-out moments from the early episodes is when Ramsdale throws a dressing-room strop after conceding a late goal in a 3-1 win against Aston Villa.

He explained: “That was in the early stage of my Arsenal career — and in the previous two years at Bournemouth and Sheffield United, a late goal would have resulted in either a draw or a defeat.

“My standards are high and I believe that goal difference can be a huge factor. So we have to defend for 96 minutes and not take our foot off the throttle.

“I’m not selfishly focused only on clean sheets.
“I just felt that we needed to defend properly as a team.”

Ramsdale almost certainly gets his competitive streak from his father, Nick, who makes a sweary cameo in the documentary as he watches his son in action.

“He tells me week in, week out to stop passing it into midfield because it is going to give him a heart attack.

“I just say to him, ‘You’ll have to speak to Mikel about that’.

“And because he has got the manager’s number from when I signed, he says ‘OK, I will’.

“So then I have to stop him from going ahead and doing it!

“He’s always a very competitive person — and I’m told he walks in and out of the box during every game.

“You can see during the programme that he tries to kick and save every ball with me while he is watching.

“He’s in a state of complete exhaustion by the time I see him after games.

“And it’s only going to get worse for him the better we do.

“Hopefully I’m going to get into the Champions League and, you never know, I might play in a World Cup or a Euros. So it’s something he’s got to deal with.”

All or Nothing: Arsenal launches on Prime Video on Thursday, with new episodes weekly.