Ronaldo has been linked with a summer exit following a disappointing campaign on his comeback season.

The five-time Ballon d’Or winner has been the Red Devils’ shining light with 24 goals and three assists in 38 matches across all competitions.

But Dublin finds it hard to see the forward staying after a disastrous season that saw the team miss out on all trophies and the Premier League top four.

But the ex-England international also doesn’t know where else the 37-year-old can go. 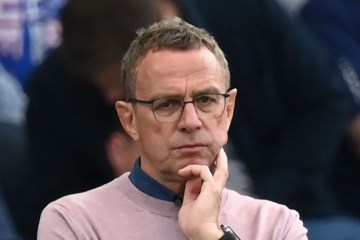 “I find it hard to see him staying at United unless something is done incredibly quickly.

“Then again, I don’t know where he goes. I think United will be lost without him so I am hoping he is going to be [staying at] United without a doubt.

“But I don’t know why he’d stay to be honest with you. Unless the new manager says right £300million, these players are coming in, please stay. Otherwise I think he’s gone.”

Dublin also noticed how fed up Ronaldo looked when he started to laugh and shake his head in disbelief during United’s 4-0 drubbing at Brighton.

The legendary centre-forward claims that moment “summed up today” for Ralf Rangnick’s flops.

Dublin added: “One of the tell-tales signs for me was after one of the goals [when] Ronaldo was laughing.

“That, for me, was today. That just summed up today.”

And Graeme Souness said: “You can see what he’s thinking, he’s thinking: ‘The last time I had Paul Scholes, I had Roy Keane, Rio Ferdinand… Now I’ve got this lot’.”