“I was going home, and my phone started blowing up; then I saw it ‘I’m like wow like Daryl got what he wanted’”

Joel Embiid gave some more information on his side regarding the James Harden trade during Thursday’s episode of “4 Plays” on “JJ Redick”.

During the episode, Joel Embiid joined Redick for a conversation regarding the James Harden trade.

“I believed that in the summertime it (the trade) was likely to happen just because of everything that was out there and you know Daryl’s relationship from the Houston days, so I believe that you know that was something to monitor.”

“But at the top, like until it happened, I was like ‘there’s just no way like that’s just not going to happen’, and then when it happened I was like, I remember we had practice during the trade deadline and I was going back home and my phone started blowing up, so I’m like ‘what’s going on?’ and then I saw it I’m like ‘wow like Daryl got what he wanted.’”

The conversation between Joel Embiid and JJ Redick revealed that the former was sure of the trade long before talks had even surfaced.

Joel Embiid’s tweet on the day of the trade makes more sense when you realize he expected the trade to happen. Embiid explained that the tweet had no relevance to the trade. He merely thought the kid in the post “had swag”, but the NBA world speculated the post to be a subtle celebration to Philadelphia’s new star. 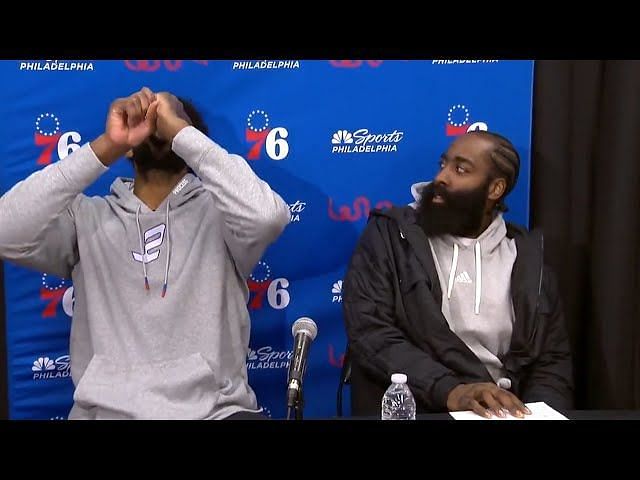 Since joining Philly, James Harden has averaged 23.0 points, 7.4 rebounds, and 9.8 assists. Harden is 0.2 assists away from averaging a double-double across his first 15 performances for the 76ers.

Joel Embiid, who has been atop MVP contention for much of this season, has notably been loving Harden’s presence on the court. Embiid is averaging 29.9 points, 11.4 rebounds, and 4.3 assists per game. The Philadelphia 76ers currently stand in 4th place in the Eastern Conference with 46 wins and 30 losses.

Embiid’s story does reveal that Philadelphia were interested in Harden long before James even started to voice his displeasure with the Nets. It makes sense why the squad jumped on him so quickly once his dissatisfaction went public.