DEONTAY WILDER admitted he originally intended to KILL the internet troll who abused his daughter online.

The former heavyweight champion in 2014 travelled to a gym in Los Angeles to confront renowned troll Charlie Zelenoff.

Wilder said Zelenoff racially abused him and made threats about his daughter. pic.twitter.com/fnNohDnnns

Zelenoff, who signed a legal waiver assuring that he would not sue for any damages, had attacked Wilder’s daughter online.

And he was later battered around the gym by the Bronze Bomber, who a year later won the WBC world title.

Now eight years on, Wilder, 36, opened up about the incident and revealed he would have shot Zelenoff, had it not been for his cameraman.

He said on the Pivot Podcast: “I really went there to kill him, to shoot him to be honest. 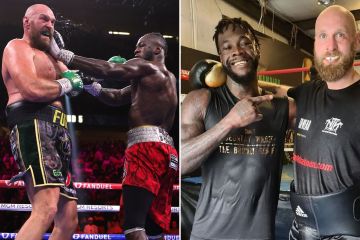 “And the Devil got in me at one point of time because we were in some alleys and my voice changed, cuz was there with me, I brought cuz with me too.

“One point in time my whole damiana about myself changed, I was like, ‘Come in this alley.’

“I knew what I was finna do, even cuz will tell you. My whole damiana, my face changed because I knew what my capabilities were.

“But I knew I couldn’t do it because my cameraman was one of my good friends and I had a vision of him snitching on us and I would’ve had to shoot him too.

“I told him, I said, ‘I couldn’t do it, because I would’ve had to shoot you too. Because I saw you telling on us.’

Zelenoff had made a name for himself by picking on strangers at gyms, before trying to fight them, even doing so with Floyd Mayweather’s dad.

But Wilder claimed in a 2014 interview with The Ring Magazine, that he only agreed to confront the troll after being racially attacked.

The American, who returns on the weekend against Robert Helenius, was in LA to watch a fight when he taught Zelenoff a lesson.

Wilder said: “I really wanted to do more than what I did, but I’m at a point where I have opportunities and I’m blessed, man. I’m aware of that.

I really went there to kill him, to shoot him to be honest.

“But, basically, this dude, man, he’s been harassing me and he’s been sending insulting messages to me where he was threatening me and went overboard.

But the only reason I went this far with it was that he went overboard. He threatened to murder me, and he called me the N-word.

“Then what took it over the top is that he said that he was going to duck tape my daughter’s mouth and when I was reading that, I was picturing that actually happening.

“One way that you can get to me is to talk about my kids in a manner like that. Then, it’s personal and I’m a different guy.

“There’s one part of Deontay Wilder who is the silly guy, the humble guy and the funny guy with a nice smile.

“But there is another part of me that I really don’t want people to see.That’s the part will come and get you.

“But I really held back, because my original plans were to really hurt this dude, man.

“Some people don’t really know that side of me, but I brought it out and I don’t like to bring that out for people to see.”

David Haye says he would have beaten Tyson Fury, Anthony Joshua, Daniel Dubois and Joe Joyce in his boxing prime