Inside Bernie Ecclestone’s amazing life with wife Fabiana, 46, including £30m yacht, £3bn fortune and his own MOUNTAIN

FORMER Formula One chief executive Bernie Ecclestone and his Brazilian wife Fabiana live a life of luxury which includes £30million yachts and a total fortune worth £3billion.

Ecclestone was chief executive of Formula 1, until he was replaced by Chase Carey.

But since moving away from F1, he and wife Fabiana, 46, live a life of luxury – swimming in a fortune believed to be around £3bn.

Not only does he have use of a £30m yacht, Ecclestone also has luxury homes, a coffee plantation and his own MOUNTAIN.

However, despite his large fortune, Ecclestone has landed himself in hot water after he was charged with fraud.

The British business magnate was accused of failing to declare overseas assets worth more than £400m to the taxman. 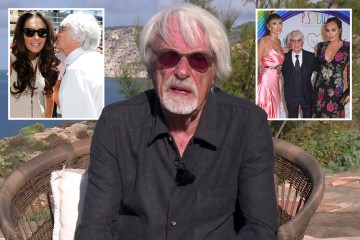 Ecclestone will appear before magistrates in Westminster, London at 10am on August 22.

In a car-crash interview, the billionaire also ridiculed hero Ukrainian President Volodymyr Zelensky as a “comedian”.

He launched into a bizarre rant on Good Morning Britain that showered the tyrant Putin in grim applause for his evil invasion of Ukraine.

Bernie’s property empire is one to envy.

He did formerly own a home in Kensington Park Gardens that overlooked the palace Prince Harry and Meghan Markle lived in until they dropped their royal titles.

But he sold it for a whopping £57m when ex-wife Slavica Radić reportedly refused to move in.

In London he had an apartment in Knightsbridge, above the old F1 offices in Princes Gate.

However, in 2017 he relocated to Switzerland after Liberty Media took control of the group and offered him an undefined role as emeritus chairman.

Today, he lives in a £23m chalet called ‘Le Lion’ in the exclusive resort town of Gstaad, where neighbours include Italian fashion designer Valentino.

It’s been in the Ecclestone family name for over 20 years, and is where Bernie and Fabiana married in a private ceremony in 2012.

Astonishingly, he also owns a mountain in Gstaad called the Glacier 3000.

Daughter Tamara revealed the extravagant purchase on her reality show Tamara’s World saying he bought it simply because “he liked it”.

Daughters Petra and Tamara are clearly the apple of Bernie’s eye.

They too share in his wealth, living the high-life in multi-million pound homes.

But, ensuring they know exactly how much they mean to him, he named his £30m yacht after them.

The Petara can accommodate 12 guests, has a spacious contemporary interior designed by Studio Celeste Dell’Anna, and boasts a cruise speed of 16 knots.

She was seen last year arriving at Port of Gruz in the beautiful Croatian hotspot Dubrovnik, where Bernie loves to visit on holiday.

Croatia is believed to be Bernie’s favourite holiday destination, so Ace can look forward to spending his early years there.

This year he added ANOTHER yacht to his collection that belonged to his old mate Flavio Briatore.

The stunning 63-metre Force Blue became available for auction, after Briatore was convicted of not paying the VAT.

Able to house 12 guests, Force Blue possesses luxury features including a spa, gym and Jacuzzi to relax in – as well as a cinema and a nightclub.

And if he doesn’t want travel by sea, he can always go by air in his £40m Dassault Falcon 7X.

It seats 12 passengers, promising uncompromising cabin comfort, and has a range of 5,950 nautical miles.

Aside from motorsport and love of Chelsea, Bernie has a passion for coffee.

It’s what led him to buying an impressive £8million farm in Brazil that’s bigger than Monaco, where he creates his own batch called Celebrity Coffee.

Over 30 people work on the farm, where there are around 600 cows and cattle, 18 horses, six ponies, eight dogs, and dozens of chickens and swans.

Expensive Japanese koi carp can also be found in the ponds surrounding the farm’s entrance.

Staff live on site in one of 22 homes built on a field the size of a football pitch.

A short golf kart buggy ride away is the plantation, where the magic happens.

The Ycatu Plantation was abandoned until the Ecclestones took over, and they hired experts to restore the land.

“I’ve been in Brazil along 45 years and I’ve made a lot of friends. I’ve had really happy times around here,” Ecclestone once told Sprudge.

It’s Fabiana who manages the brand, with the plan to go global in luxury hotels and restaurants.

In 2020, at the age of 89, Bernie became a dad for the fourth time when baby Ace arrived into the world.

His eldest child, Deborah, 67, was born to his first wife Ivy Bamford before he had socialites Tamara, 38, and Petra, 33, with his second wife, Slavica Radic.

Unlike her sisters, Deborah shuns the limelight. Like dad she works in business but not much is known about her personal life.

But Tamara and Petra made sure they enjoyed daddy’s wealth, when they were given access to some of his funds when they turned 18 through a trust.

“I don’t think they should have bought handbags and shoes but anyway, they are in the fortunate position of being able to,” he told The Independent in 2012.

And they also have a penchant for living in expensive homes.

Petra lives near basketball legend LeBron James in the exclusive Brentwood neighbourhood of Los Angeles in a home said to be worth £18m, after flipping a Holmby Hills mansion for £95m.

While Tamara lives with husband Jay Rutland and their daughter Sofia in a 57-room mansion worth a whopping £70m on ‘London’s £3bn street’ in Kensington.

They both add glam to Bernie’s already amazing life.

Previous articleNovak Djokovic’s wife Jelena in furious Twitter spat over his ‘anti-vax’ tag with Wimbledon winner banned from US Open
Next articleMeet Maverick McNealy, the super-rich golfer and heir to $957m fortune that you have probably never heard of

Champions League top scorers 2022/23: Who is leading the race?

Champions League top scorers 2022/23: Who is leading the race?

THERE’S only one thing forwards dream about other than...

WE have teamed up with 888sport, the official betting...

BARCELONA are reportedly set to sell Antoine Griezmann to...