Inside F1 Austrian GP carnage with boozing from 8am, fans urinating through fences and a ‘football crowd’ mentality

A techno beat booms out of a small tent next to the media car park followed by the word “mother f*****”; it is a most unconventional welcome to the Red Bull Ring.

Upon returning to the car later, the music is still as loud but the inhabitants are now up and cooking food on a barbecue.

One of their party is urinating through a wire fence.

The drinking starts at 8am – the same time as the techno music – and it stops in the small hours – with the majority of fans camping next to the track.

This, the picturesque home of the Austrian GP, has been transformed into a wonderful racetrack

Set in a beautiful setting in the Styrian mountains by the energy drink firm, or more precisely its billionaire owner Dietrich Mateschitz, who comes from the region. 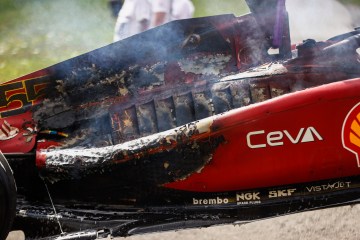 But for four days a year, it now turns into a crazy party for orange-clad fans from Holland as this becomes like a home football match for Max Verstappen.

Let’s put this into context. Traditionally, F1 races feature fans who show their support for different teams and drivers where it is common to see people wearing Ferrari caps and McLaren tops.

They had their favourite drivers but predominantly just wanted to see a decent race.

But the majority of the 105,000 people inside the Red Bull Ring are here for one man only.

The new wave of support for Verstappen brings with it plenty of colour in the form of orange t-shirts.

It is a football-crowd mentality only there is no “away end” for fans of other teams or drivers.

That same level of support was epic at his home GP last year in Zandvoort on the outskirts of Amsterdam and it all received positive praise.

But there is a line between having a good laugh with your mates and it being offensive behaviour.

Clearly, any form of harassment, abuse or racism cannot be tolerated and while it remains the small minority who cause the problem, as the sport embraces these new fans, they also have to react to the problems they create.

Seven-time World Champion Lewis Hamilton condemned reports of homophobic and racist harassment directed at some fans at the circuit.

Previous articleWho is Novak Djokovic’s wife Jelena, and how many children does Wimbledon 2022 final star have? – The Sun
Next articleLeclerc wins dramatic Austrian GP ahead of Verstappen with Hamilton third after Sainz’s car bursts into flames

LIVERPOOL are willing to risk losing Naby Keita on...

PIERRE-EMERICK AUBAMEYANG would be a great signing for Chelsea...
NFTNews