LEWIS HAMILTON has unveiled his plans for Chelsea – should his takeover bid be successful.

The seven-time F1 world champion is stumping up tens of millions of pounds to boost the £2.5billion offer headed up by former Liverpool chairman Sir Martin Broughton.

Hamilton, who owns an £18million home close to Stamford Bridge, wants to be hands-on in helping the club having been approached by Broughton.

He said: “I heard about the club being up for sale in the news. Everyone is aware about it.

“We were contacted and Sir Martin took time to speak to me on the phone and explain his and his team’s goals.

“If they were to win the bid, which was incredibly exciting, it is very much aligned with my values. 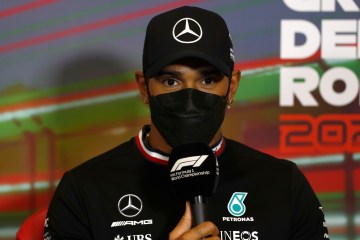 “Firstly, we are trying to acquire a team and move it forwards. This is a team, it’s all about the community.

“That’s what really makes a football team, it’s the people in and around it.

“They’ve been quite leading in their work in diversity and inclusivity and becoming more diverse and progressive.

“So it’s not that we’re associating ourselves with previous owners, our goal is to continue some of the work that they’ve already done and have even more of an impact and engage more with the community.”

Alongside his ambitions to improve diversity, Hamilton plans to help turn the loss-making club around and into profitability.

He added: “To be involved in something as big as this is exciting.

“Of course, it’s a business venture but through the discussions that we’ve had, and how the team plan to manage this moving forwards and improve that, and slowly decrease those losses and turn it into a profit-making organisation.

“That’s going to take a lot of work. There’s so many moving parts and I don’t have all the strategy for all that.

“We haven’t yet won the bid, so I’m sure all that will come afterwards. But the team, the consortium – it’s a consortium of lifetime Chelsea fans and others who have come to it later like myself.

“There’s not anyone that’s a part of it that has the mindset of losing.

“I think Chelsea already has a winning mindset but I think we can do better moving forwards.”

But despite committing to the project to buy the Premier League club, the 37-year-old says that despite his growing business empire, which takes in property and fast-food chain Neat Burger, he is still focussed on racing in F1.

He said: “At the moment my primary focus is continuing in Formula One and this isn’t my first business venture or investment.

“But it’s something that I’m excited about. I would say for sure early on I wouldn’t be able to be as hands-on as some of the other people that are a part of it.

“We haven’t won it yet but if we do, there’s lots of opportunity to be involved more and more over time, which is super exciting and particularly beyond racing.

“You see in that sport there is a lot more work that needs to be done to be diverse and more inclusive.

“It’s an amazing platform to bring in and educate a lot of the amazing fans that are out there.

“And there’s some amazing talent within the team that have already stood up against discrimination and worked very closely with the organisation to move forward.