NICK KYRGIOS bellowed “is it big enough for you?” after dropping the second set of today’s Wimbledon final against Novak Djokovic.

The Aussie had gotten off to the perfect start in the biggest match of his career, taking the first set 6-4.

But as he so often has in the past, Djokovic wrestled back momentum in the second stanza, taking it 6-3.

This marked the first time Djokovic has ever won a set against Kyrgios in their three meetings – the other two coming in 2017.

After losing the set, fiery Kyrgios took out his frustration on his support team.

He shouted repeatedly at his box, including the question “is it big enough for you?” 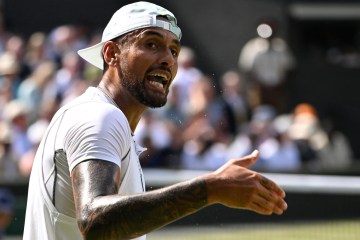 The 27-year-old could be heard swearing and then screamed “say something” – seemingly appealing for his team to help him out.

Kyrgios’ team, including girlfriend Costeen Hatzi, have been helping him every step of the way this fortnight.

The first time singles Grand Slam finalist has been pictured getting cosy with Costeen on the practice courts at Aorangi Park.

Djokovic even appeared to share a joke with Costeen as he walked past the light-hearted session.

Kyrgios used to have a particularly fractured relationship with the 35-year-old Serb – even labelling him “cringeworthy” in 2019.

But things have gotten far more cordial of late, with Nick even suggesting he had a “bromance” with the 20-time Grand Slam winner now.

During the third set, Kyrgios fumed about a girl sat in the front row to the umpire, appealing for her to be kicked out.

He said: “She’s drunk out of her mind in the first row, talking to me in the middle of the game. The one with the dress, the one who looks like she’s had about 700 drinks, bro.”

Kyrgios went on to be broken at 4-4 in the third set, giving his team both barrels once again.

He appeared to take issue with their lack of excitement after each point, appealing for them to be more active between points in a lengthy rant and throwing his water bottle to the ground in anger.

After Djokovic served out the set, Kyrgios sarcastically applauded his box while angrily shaking his head.