ANTHONY JOSHUA’S preparations are ramping up with his mammoth rematch against Oleksandr Usyk less than three weeks away.

The 32-year-old is bidding to win back his world titles when the pair face off in Saudi Arabia on August 20.

And Joshua is sparing no expense to ensure his preparations are as best as they can possibly be.

AJ’s setup in Jeddah has been organised by Ringcraft, who have shared an inside look of his camp to Instagram.

The Watford-born fighter has a ring for sparring, plus a host of different types of boxing equipment.

There are punchbags and speedballs in the specially designed gym. 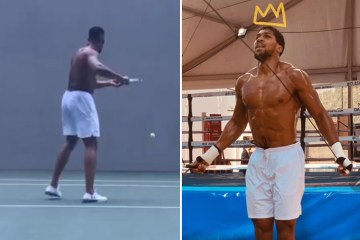 Then on the other side of the floor there are running machines, cycling machines and weights.

AJ has made sure there are air conditioning units installed in the makeshift gym to ward off the scorching Saudi Arabian heat.

Joshua jetted out to the kingdom last month on a private jet with his close-knit team.

The 24-2 fighter has brought in Robert Garcia and Angel Fernandez to train him, having parted ways with Rob McCracken after his first defeat to Usyk.

And Brit cruiserweight Richard Riakporhe reckons the pair will get the aggressive best out of Joshua.

Riakporhe told Sky Sports on AJ’s trainers: “Both of them have a similar mentality – very, very aggressive. Very aggressive coaches and [those are] their tactics. They don’t mind going in.

“All they care about is going into war, going to war but with intelligence.

“But we’re going to have to impose our will on our opponent. That’s the philosophy and it’s all about knockouts.

“That’s all they care about, honestly, knock them out and then it’s about how they get knocked out.

“Because you can’t go in there just throwing bombs and not expect things back. You obviously have to be really strategic. It’s all about the results and that’s all they care about.”

Riakporhe added that Joshua’s mouthwatering rematch with Usyk will be a “kill or be killed” battle with AJ putting it all on the line in a bid to win back his WBO, IBF, IBO and WBA world crowns.

The cruiserweight continued: “You’re going to see that old-school fighter. I know because he’s been training like that.