The wantaway Portuguese star made his return to action as the Red Devils drew 1-1 with Rayo Vallecano at the Theatre of Dreams.

He was substituted at half-time, however, and opted to leave the game early.

Ronaldo, 37, did not stay behind to clap the fans or attend the manager’s debrief.

The forward will NOT be sanctioned by United for his actions, but he has left those within the club unimpressed with his conduct.

A United insider told SunSport: “It is not a good look to leave early when you have been involved in the squad. 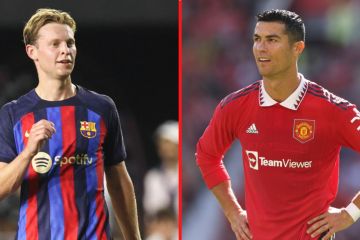 “It is different if you are up in the stands and not involved.

“You would expect someone who has played in the game to be in the changing rooms at the end to listen to the manager’s thoughts.

“Also a lot of people were there to see him and he was not even involved in the clapping of the fans after the final whistle.”

Boss Erik ten Hag has been demanding togetherness in his Manchester United squad ahead of the new season.

Ronaldo had a first half disagreement with Ten Hag in a break of play.

The manager called the team over while a injured Vallecano player was attended to.

Ten Hag was quite animated in what he wanted Ronaldo to do but the player put his arms out to one side as if in disagreement.

The former Real Madrid and Juventus ace wants out of Manchester United just 12 months into his return.

He missed the pre-season tour of Thailand and Australia for family reasons.

The club are refusing to sell despite the fact Ronaldo’s agent Jorge Mendes has told them he has an offer on the table if they just name their price.

BARCELONA reportedly paid about £126milion of their own money...

KSI has called out Jake Paul for a Wembley...