It is Chelsea’s third consecutive home defeat having been beaten by Brentford and Real Madrid previously.

But rather than criticise his team or Andreas Christensen’s costly mistake, Tuchel blamed the pitch.

The German boss claimed the ball bobbled awkwardly when Christensen attempted to pass the ball back to Edouard Mendy – only for Eddie Nketiah to pinch the ball and score to put Arsenal 1-0 up.

Tuchel suggested a similar problem with the pitch caused Mendy’s mistake against Real, with Karim Benzema taking advantage on that occasion.

In his post-match press conference the Chelsea manager said: “It is a very difficult pitch we have here. It’s not to our favour. 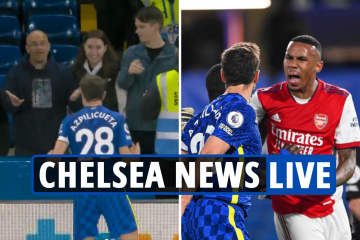 “We had the same mistake against Real Madrid in the Champions League that cost us the next round and it cost us again here.”

Tuchel refused to speak about individual players when asked about Romelu Lukaku’s performance, with the striker again failing to make the most of his return to the starting line-up.

It was a bad night for Chelsea made worse by the fact there were 10,000 empty seats due to fans not being allowed to buy tickets.

The defeat even turned more sour after full-time as captain Cesar Azpilciueta angrily confronted a Chelsea fan who appeared to be criticising his team’s performance.

Tuchel responded to the incident by sympathising with the fan, saying: “I was not part of it. I saw it but honestly I can also understand the fan.”