FRANK LEBOEUF has slammed Cristiano Ronaldo for attempting to force a move away from Manchester United.

Ronaldo, 37, has informed Man Utd officials that he wants to leave the club before the transfer window closes.

After delaying his return from the summer break, the five-time Ballon d’Or winner, who still has one year remaining on his contract, held showdown talks with club chiefs over his future.

And while the Red Devils have insisted that he is not for sale, Ronaldo is still eager to leave Old Trafford.

Former Chelsea defender Leboeuf has since spoken out on the situation, claiming the attacker has been ‘disrespectful’ to the club and fans.

When speaking to ESPN FC, he said: “It is (wrong) for me. 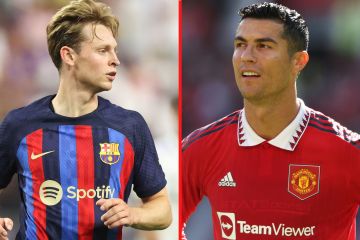 “You have to stay, you have to show respect to the other players, to the fans that came.

“You still belong to the club, you signed for it, you have to play for them, didn’t make any mistakes

“They want to keep you so the only thing you have to say is at least sit on the bench and wait until the end of the game.”

With the new Premier League season set to kick-off in just a few days, many other ex-professional footballers have criticised Ronaldo for trying to force a move, including his former teammate Louis Saha.

He said: “He made it clear he wants to go, otherwise his actions and communication would have told another story.

“His priority should be to help Manchester United, and this doesn’t appear to be the case at the moment.

“His dream is clearly the Champions League, and nobody can disrespect him for that.

“But he hasn’t shown enough towards the Manchester United project and the current manager for my liking, it’s not great.”

Ronaldo has been linked with a number of clubs since revealing his desire to leave Man Utd.

New Chelsea chief Todd Boehly had considered a swoop for him, but Thomas Tuchel was against the idea.

Atletico Madrid were also linked with a move, however club president Enrique Cerezo said that it would be an “impossible” transfer.

Barcelona are now claimed to be considering a bid, despite Ronaldo’s Real Madrid legacy.

Despite ongoing talks of a move away, Ronaldo returned to the United squad at the weekend for a pre-season friendly against Rayo Vallecano.

He started the game, but was substituted off at half time.

The Portugal skipper then left Old Trafford before the final whistle, sparking outrage from fans.

Despite the controversial act, he has not been sanctioned by United officials, but he has left those within the club unimpressed with his conduct.

A United insider told SunSport: “It is not a good look to leave early when you have been involved in the squad.

“It is different if you are up in the stands and not involved.

“You would expect someone who has played in the game to be in the changing rooms at the end to listen to the manager’s thoughts.

“Also a lot of people were there to see him and he was not even involved in the clapping of the fans after the final whistle.”

DESHAUN Watson and girlfriend Jilly Anais have been going...
NFTNews