JAKE PAUL was called out to a fight by John Fury after heckling his son Tommy from ringside.

The YouTuber-turned boxer was a special guest to watch Fury’s return to the ring, in Dubai on Floyd Mayweather’s undercard.

He was due to face Paul Bamba, 33, but a weight disagreement saw the American withdrawn.

Instead, Rolly Lambert, 33, filled in with just hours to go for a six-round exhibition with Fury.

The bout went the distance and Paul made his feelings known from ringside, telling Fury he “sucked at boxing.”

Words were then exchanged from ringside, prompting Fury’s dad and coach John to rip his top off and challenge the American. 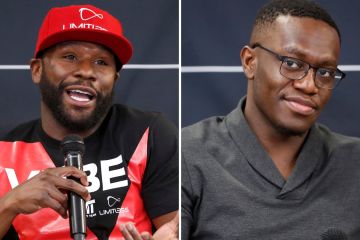 John said: “Forget my son, I’m the king of the bare-knuckle man.”

Addressing Paul, Fury said: “There’s a certain b**** from ringside that I want in the ring now.

Fury added: “Get in the ring now. Get in that ring now, come on, the water is just fine.”

Paul responded: “How about you get out of the ring now?”

The pair are believed to be in line to fight in February, following Fury’s two prior withdrawals.