JAKE PAUL has backed Tyson Fury to beat one of his boxing inspirations in Anthony Joshua.

AJ accepted a 60/40 financial split in Fury’s favour in return for a WBC world title shot on December 3 in Cardiff.

It is a fight hailed by YouTube-turned boxer Paul but one he cannot see going Joshua’s way, no matter how much he admires the heavyweight.

He told talkSPORT: “I gotta go with Tyson Fury man.

“I really like Anthony Joshua. He’s a dope guy, he inspires me, but Tyson’s just not beatable man, unfortunately.

“He’s too big and has too much skill. He’s 270lbs, 280lbs sometimes, bouncing up and down in the ring like Muhammad Ali, has an amazing chin that withstood dozens of punches from Deontay Wilder – the hardest puncher in heavyweight history. 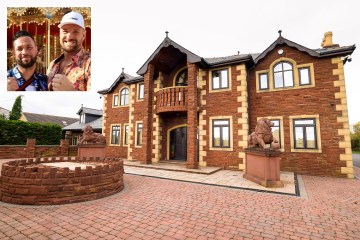 But Usyk ruled himself out of a unification bout this year after returning home to war-torn Ukraine for the first time.

It left Fury, 34, to surprisingly turn his attention to AJ and talks over Battle of Britain escalated quickly.

Joshua accepted the terms and was sent a contract by Frank Warren.

And Paul, 25, believes the fight can help the sport gain supremacy over their combat sports rivals.

He said: “That’s a huge fight.

“I think it’s a fight that needs to happen for the sport of boxing to continue to grow and make waves and continue to take over MMA, which is failing recently, specifically the UFC.

“I think that fight needs to happen so that boxing is number one in combat sports.”

Paul, 25, returns himself on October 29 against UFC legend Anderson Silva, 47, his first opponent with a prior boxing record.