JOE JOYCE and Oleksandr Usyk put up their fists after an unplanned meeting with one another – but only for a photo.

Putney pounder Joyce is the mandatory challenger for Usyk’s WBO title and has been vocal about getting his hands on the undefeated Ukrainian.

And get his hands on Usyk he did after a recent unexpected rendezvous – albeit a friendly one at the 35th World Boxing Organization Convention.

Promoter Frank Warren shared an image of the pair embracing and putting their fists up for a photo to his Instagram page on Tuesday.

His accompanying caption read: ” A future clash we can’t wait for!” 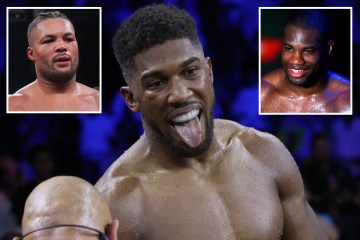 Warren recently said: “We’ve worked very hard over the last few years on this heavyweight scene and we’ve guided our guys in different organisations and we’ve boxed it off a bit so I’m pleased.

“Joe done extremely well [against Joseph Parker], got great reviews back from America because his fight done big numbers over there

“It was a good fight to watch. He’s set himself up.

Unified heavyweight champion Usyk is open to defending his belts against Joyce, although he jokingly claimed he’s afraid of The Juggernaut.

He told Seconds Out: “No I don’t want to fight with him. He’s like a Tank.

“Did you watch him fight? Jokes aside, I wanna fight for belts.”

Horse racing tips: Bash the bookies with this standout 14-1 fancy at Chepstow on Tuesday

RB Leipzig vs Liverpool – free bets: Get £30 BONUS to spend with SBK