The Three Lions pals were on opposite sides during Manchester City’s heated clash with Borussia Dortmund.

And things threatened to boil over in the closing stages of the game.

Bellingham, 19, took exception to a challenge from Foden, 22, on Dortmund right-back Thomas Meunier.

The teenage sensation came running over in defence of his club team-mate, pushing Foden in anger.

Foden himself extended an arm to push Bellingham back as glared at his Three Lions colleague. 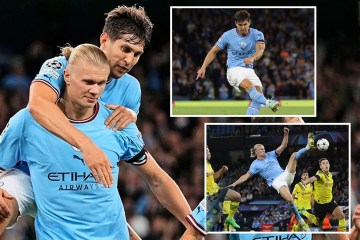 Fellow England man Kalvin Phillips rushed over to hold the pair apart as they squared up to each other and exchanged words.

But the general consensus from social media was Bellingham would come out on top in a clash with Foden.

One wrote: “Bellingham would have him.”

While another said: “Bellingham owns Foden.”

Foden and Bellingham are set for an awkward reunion next week, with both set to be included in Gareth Southgate’s final camp before the World Cup.

And it was City man Foden who had the last laugh at the Etihad.

Bellingham had struck just before the hour mark to give Dortmund a shock lead, but John Stones and an Erling Haaland stunner helped the home side to a comeback 2-1 win.

Former Birmingham City man Bellingham has been strongly linked with a move to the Premier League.

But when quizzed on his future, the midfielder told TNT Sports: “It’s hard to ignore it, there’s a lot of talk but when I’m on the pitch you can see how committed I am to Borussia Dortmund.

He added: “I’m in a new culture, I’ve taken myself outside of my comfort zone, I’ve come to something different to what I’m used to.

“I’ve thrived since I’m out here thanks to the staff around me. I’d advise more players to do it.”