NICK KYRGIOS lept to Emma Raducanu’s defence after criticism from ‘older legends’ – and then backed her to win more Grand Slams.

The Aussie even labelled the British sensation one of the “most important” female tennis players in the world.

Raducanu, 19, burst on to the global stage by winning the US Open as a qualifier last September, not dropping a single set in her ten-match streak.

But struggles on the court since, regular coaching changes and nine major endorsement deals have led to some criticism from former players.

Raducanu – who lost in round two at this year’s Wimbledon – tweeted “NK,” with a magic wand yesterday afternoon as he swept Cristian Garin aside to reach a maiden Grand Slam semi-final.

The post drew anger from some of Rads’ fans after it was announced on Tuesday that Kyrgios will appear before a court in Australia after he was accused of assaulting his ex Chiara Passari, 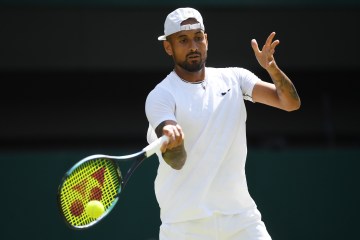 But Kyrgios was quick to return the compliments for the Kent ace.

He said: “I haven’t had much communication with Emma before.

“I feel like I’ve kind of stuck up for her a bit in the media with some of the stuff that older legends kind of love to just throw shade and have their opinions on young players, young important players.

“She’s obviously going to be one of the most important players on the WTA Tour for a very long time.

“She’s obviously capable of winning a Grand Slam at 18. She’s very capable of doing that again.

“I’m glad that I have those supporters. If she loves watching my tennis, that’s great. I enjoy watching her tennis, as well.

“But I think that was just a bit of a payback for how much I’ve kind of stuck up for her in the media.”

In March, Kyrgios lept to Raducanu’s defence when she was accused of losing “respect” in the tennis locker rooms by ex-pro Daniela Hantuchova.

He tweeted: “What’s with old retired players giving their opinion on our stars now?

“I read an article about a past female player talking about Radacanu.

“No offence, but she is a far, far bigger name already.”

Kyrgios is due to play Rafael Nadal in Friday’s Wimbledon semi-final.

However, the Spaniard is nursing an abdominal injury which could force him to withdraw from the tournament – in which case Kyrgios would get a walkover into Sunday’s final.