THEY have always loved their goalscoring heroes at Forest…and in the likes of Trevor Francis, Garry Birtles and Stan Collymore there have been a few.

Yet while young Brennan Johnson clearly has a way to go before he reaches the heights of some of those stars from the golden days, he is definitely going the right way about it.

In fact if you asked any fan right now and the chances are the young Welshman would get as big a vote as any of them, after his season in the sun reached a new level here.

Johnson, still just over a week short of his 21st birthday, struck the killer second goal which took his side oh so close to the Championship play-off final.

All in front of his dad, former Forest striker, David as well, who looked on as proud as punch from the stands.

Unlike most of those around it, it must be said, as the Blades were left staring at yet another play-off hangover. 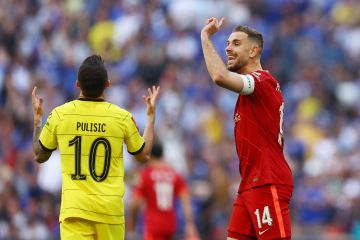 This is their ninth attempt to win promotion in this end-of-season shoot-out and they have yet to taste success. Clearly one over the eight means yet another hangover.

But really this was a day for Johnson, Forest and Steve Cooper, the manager who has inspired them from relegation zone in September to the fringes of the top flight in May.

A Premier League return after over two decade away is tantalisingly close and if they make it to the final, they will be red hot favourites to finish the job, too.

With Johnson and Sam Surridge such a sharp-shooting attacking double act, no wonder and in truth Forest could have ended with hatful..

Not that they will complain at a one-goal lead on their own patch. Although two slips from Sheffield United defenders did play a key part in both goals.

First Ben Osborn ended up on his backside as he chased back when Forest broke, and could only look on in agony as Jack Colback struck the first.

And then John Egan was guilty of dithering and paid the ultiumate price when Johnson delivered a clinical side footed finish.

If it hadn’t been Sander Berge’s last second header, in truth the whole tie would be over already. And if the return leg on Tuesday is anything like this, we are in for a treat.

Although if Forest do mess it up at the City Ground they will forever rue the ones which got away in a first half when they could have run riot.

Instead all they had was a one-goal lead at the break – and that courtesy of a Sheffield slip, as well.

Joe Worrall’s clever ball into space had sent Surridge haring away, and he deserves credit for not only reaching, but controlling his hooked cross.

The Blades would have been caught light in the middle in any case – yet when Osborn lost his footing as he raced back, they were left without a soul.

Yet he didn’t have a hope when the rebound fell to Colback a couple of yards out, who really couldn’t miss.

The Blades would have levelled if John Egan’s header had been a foot to either side, yet striker Surridge of all people was on the line to nod it away.

If that was a chance fluffed, it couldn’t hold a candle to the point blank header Ryan Yates somehow put wide for Forest when James Garner’s cross found him unmarked six yards out.

Then Johnson dragged another strike a foot or so wide – this time after his quick feet carved the shooting chance – as Forest threatened to cut loose.

But you really sensed it could be a day of regrets when Foderingham pulled off a fine double save to first deny Surridge and, even more impressively, Johnson.

The Blades were certainly rocking, yet while a second goal may have been the knockout punch, it took until 20 minutes from time to arrive.

And again the home side were left with only themselves to blame, because Egan had all the time in the world to pick a pass downfield, rather than wanting way too long at the back.

That was enough for substitute Joe Lolley, who shot in and nicked it away, before charging into the box.

Full marks to John Fleck for scooting back and throwing himself to block his drive… but if his efforts merited more good luck, they got none.

For instead the ball cannoned back across the box and Johnson showed the cool, clinical finish of a man ten years older to sidefoot into the top corner.

Game over today. Tie all but over too, so we thought. Until Berge’s header deep in stoppage time gave the Blades a lifeline.

Whether Forest live to regret those missed chances we shall see, but put it this way.

They’d still have snapped your hand off to be in this position when Cooper arrived.

Read how the match unfolded with our blog…

Liverpool midfielder Fabinho has responded to Kylian Mbappe's jibe at South American football. The Brazilian claimed that his country...
Sport