CHARLES LECLERC’S victory promises to reignite the F1 title race – while it was the Ferrari of his teammate, Carlos Sainz, which caught fire.

Sainz, who had won last weekend at Silverstone, was running in third place when his engine gave out a cough of blue smoke, lost power before a quick explosion.

The Spaniard’s car came to a halt before catching fire, only there are no handbrakes on F1 cars, so as he tried to jump out with flames licking at his behind, it started moving backwards.

Quick-thinking Sainz reversed his fiery car against the barriers to stop it from rolling back into incoming traffic – potential accident averted after Zhou Guangyu was saved by his halo seven days ago at Silverstone.

Leclerc’s win was his first since the Australian GP – the third race of the season – back on April 10th, as his title hopes had been dashed by poor reliability.

It nearly cost him here too, as his sticky throttle made life hard over the final 10 laps but he was still able to hold off Max Verstappen’s unusually sluggish Red Bull. 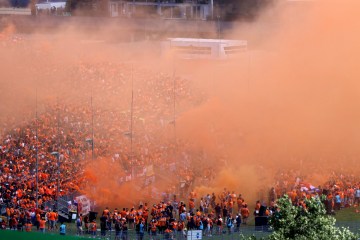 Leclerc said: “I was scared. I was really scared. It wasn’t just a little bit stressful. It was very stressful.

“The throttle was really inconsistent and it would get stuck, so in turn three, it was very tricky because that’s where you don’t want any more speed in the corner but we managed to get the car to the end.

“I definitely needed that win. Whenever I got to a new race I had a smile on my face and I kept being optimistic.

“But obviously, hard races after hard races, it just felt like everything was against me. So, finally we had a breakthrough. A good race today and it really feels good.”

Verstappen’s problems were evident from the first couple of laps as he was unable to pull away from the two Ferrari’s.

Leclerc was able to reel in Verstappen’s lead and overtook him at turn four on the 12th lap – it was the first of three times he would overtake the Dutchman on his way to glory.

Verstappen, who crossed the line in second place, still has 38 point lead over Leclerc in the championship.

“But even on an off-day to lose five points is not too bad.

Lewis Hamilton completed the podium making it three third-places in a row – helped largely by Sainz’s DNF and Sergio Perez’s retirement after he collided with George Russell at the start.

Hamilton said: “I definitely wasn’t expecting that. Saturday was a difficult day in a rough weekend

“It is massively satisfying. I was a bit lonely out there because those guys were 30 seconds ahead and I was just watching their race on the TVs.

“I was getting a fans’ view of what was happening. I could see their overtakes being replayed on the TVs.

“We have made some improvements this weekend once again and we have got to keep on pushing.”

Russell was fourth after being slapped with a five-second penalty for tangling with Perez, which subsequently caused the Mexican’s retirement.

The Mercedes driver also needed a front wing change after the collision and said he felt the stewards were too hard on him.

He said: “I’ve looked at the video and I think it’s harsh. You are racing at the start, cars are everywhere.

“Ultimately, I had nowhere to go. Sorry to him to end his race but it’s risk versus reward.”

Meanwhile, Sainz was dejected at not being able to follow up his maiden victory last week.

He said: “There was nothing coming from the engine [to warm me] that this was about to happen.

“It was very sudden and I’m bit a lost for words because it is a big loss on points.

“There is damage for sure which is not ideal. It is something that we need to look at.

“The pace was there, the degradation was very low on our car, we were fast so. I will take it and turn the page as soon as possible.”

Previous articleInside F1 Austrian GP carnage with boozing from 8am, fans urinating through fences and a ‘football crowd’ mentality
Next articleI’m the fan who Nick Kyrgios accused of having ‘700 drinks’ at Wimbledon…I’d only had two and I was cheering for him

MMA fans have taken aim at the UFC for...
NFTNews