LEWIS HAMILTON has spoken about his involvement in the £2.5billion Chelsea takeover.

The seven-time F1 world champion is investing tens of millions of pounds in the bid led by former Liverpool chairman Sir Martin Broughton.

Hamilton, who has in the past said he was an Arsenal fan, has been facing questions about the deal ahead of this weekend’s F1 race in Italy.

And the 37-year-old says he was bullied into supporting the Gunners – and initially hoped of turning pro at his local club, Stevenage.

He said: “I’ve been a football fan since I was a kid, I played from the age of four to 17 in teams every year.

“I played every year through childhood and I’ve been to numerous games. 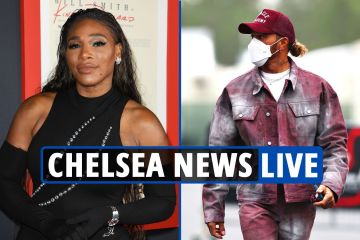 “When I was young, I used to play football as a kid around the corner and I really wanted to fit in. I was the only kid of colour there.

“All the kids supported someone different and I remember switching between these teams and when I’d get home my sister would basically beat me, saying you have to support Arsenal!

“At five, six years old I supported Arsenal but my uncle Terry is a big Blues fan, so I’ve been to so many games with him to watch Chelsea and Arsenal play.

“When I was younger I was trying to be the best player I could be and actually play for a team, trying out for Stevenage, but I ended up following racing.

“I could have only ever dreamed of being a part of the team so that for me is the most exciting thing.”

Hamilton has also roped in his friend, tennis ace Serena Williams to be part of the deal.

“When I heard about this I thought, ‘Wow’. This is one of the greatest opportunities to be a part of, so great.

“She’s a phenomenal athlete and woman. We spoke about it and she asked me my thoughts and I told her I’d be a part of it, and she was excited to join.

“We were contacted and Sir Martin took time to speak to me on the phone and explain his and his team’s goals if they were to win the bid, which was incredibly exciting and it very much aligned with my values.”