LEWIS HAMILTON has revealed his car is getting back to it’s best as the Mercedes team worked hard to turn things around at the Austrian GP.

Hamilton, 37, rounded out the podium on Sunday, making it three third-places in a row.

He was helped by Carlos Sainz’s car catching fire and Sergio Perez’s retirement after he collided with George Russell at the start.

But he held on to third without too much trouble to secure a spot on the champagne stand.

The seven-time champ has looked more himself in recent weeks and seemed bouyed by a third place finish at home track Silverstone last week.

He was complimentary about the car after Sunday’s success, moving on from early season ‘porpoising’ complaints. 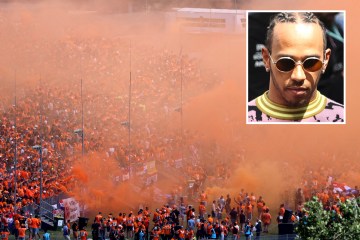 Hamilton said: “Honestly, I do feel like every now and then our qualifying pace looks like we could have been in the top three, and obviously with the crash that wasn’t possible.

“And then completely new car, everything, strips, new chassis, obviously same engine but changed the gearbox I think, all the corners, everything.

“And then that, you firstly don’t want to damage the car again, the car definitely didn’t feel exactly the same as what I had on Friday, but very, very close and it just seemed to get a bit better as I got more dialled in with it.”

Hamilton had an eventful race weekend in Austria – he was left fuming with fans from Max Verstappen’s ‘Orange Army’ who cheered as he crashed out of qualifying.

And Hamilton looked quick in Friday’s Austrian session before losing control of the rear end and crashing out at 140mph.

But eventually the Brit ended up happy with the top three finish.

He added: “I mean especially after a difficult Friday with the crash which was not expected and I’m really so still sorry to the team of course, but just so proud of everyone for working so hard to rebuild the car.

“And also just proud of everyone back at the factory for continuing to work hard. I know, they’re going to have to know what they do with those bits that I destroyed. But hopefully we have some new better bits to come after that.

“So this is a great recovery for us as a team to get a third and the fourth is some really good points.

“And so we have just got to keep our heads down and keep chipping away and we’re slowly eating into the guys ahead.”

YOU needed a map to get round Jaap —...
NFTNews