LEWIS HAMILTON will wear a Brazilian-inspired helmet in Sao Paulo in his second “home” Grand Prix of the season.

The legendary British Formula One star is still searching for his first win of the campaign.

But he has secured second spot on the starting grid.

And Hamilton will be confident that he can put this torrid run to an end in Brazil on the very same track where he came back from 10th to grab first place.

Furthermore, the seven-time champion has more of an incentive to win after officially receiving a Brazilian citizenship ahead of the weekend.

Now he has decided to celebrate that by wearing a special helmet this weekend to honour his “second homeland”. 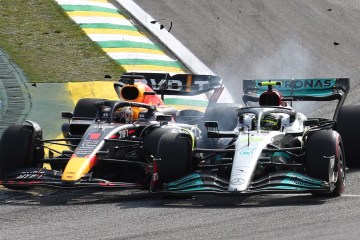 The 37-year-old posed with it earlier this week after it was unveiled.

The helmet has the Brazilian flag donned along the outside of it with the colours of yellow, green and blue dominating it.

Hamilton has become a beloved figure by Brazilian fans throughout his years of dominance in F1.

And he has also spoken numerous times of how much he idolised the late, great Brazil icon Ayrton Senna.

The Brazil GP will start around 6pm on Sunday, UK time.

Around 60,000 fans will be in attendance to see whether Hamilton can secure his first victory of the season.

You can follow all of the action from the Autodromo Jose Carlos Pace (Interlagos) in Sao Paulo with Sun Sport’s live blog.