The Red Devils were tested at Goodison Park but came through for a deserved victory.

It was the perfect ending to a difficult week which began with United losing 6-3 in the Manchester Derby.

Martinez and De Gea were at the centre of Man Utd’s defensive effort as they fended off a late siege on their goal from Everton.

The defender was clearly in awe of De Gea’s command of his box – but expressed his admiration in a strange way.

The Spanish keeper shared a pic on Instagram with his opposite number Jordan Pickford. 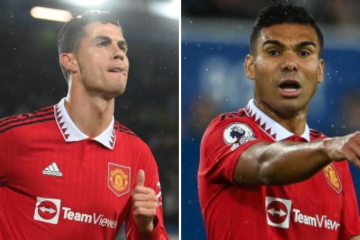 His caption read: “Top resilience and victory for the team.

“Tough stadium to play but the spirit of the group was shown.”

In response, Martinez wrote: “Que bueno sos choborra”, which translates as “You’re so good b****”.

The day had not gotten off to the best start for De Gea, who was beaten by a stunning long-range effort from Alex Iwobi.

But the away side grew into the game and Antony made it three goals in three Premier League games as he tucked the equaliser past Pickford.

Erik ten Hag’s side then hung on despite the Toffees beginning a late aerial bombardment on De Gea’s goal.

The victory comes days after a difficult away win in the Europa League as United look to get the show back on the road following the humiliation at the Etihad.

They face in-form Newcastle, then Tottenham and then Chelsea in a difficult league run next.

West Ham vs Man City – Premier League ODDS BOOST: Get Citizens at 20/1, or West Ham at HUGE 150/1 with William Hill