THIAGO celebrated winning the FA Cup by wearing a mask of Mo Salah next to the man himself.

The Spanish international was influential in the midfield at Wembley and played the entirety of the goalless game.

But Salah only managed just over half an hour after going off injured with a suspected groin injury.

The forward nervously watched as the match went all the way to penalties, the second time this season for the two clubs.

But just like in the Carabao Cup final in February, Liverpool prevailed from 12 yards against Chelsea.

It was not quite another 11-10 classic as the spot-kicks were this time halved at 6-5. 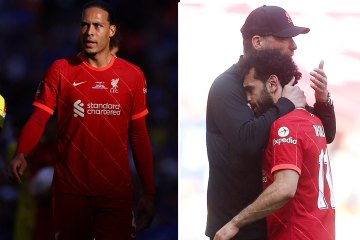 But Thiago did his best to cheer up his injured team-mate by wearing a mask of Salah while sat next to the Egyptian.

Liverpool boss Jurgen Klopp told ITV: “Mo came and he said he could carry on, but I felt a little thing. I hope he will be fine.”

Klopp was given a further scare after Virgil van Dijk came off before extra-time.

Van Dijk “Hopefully well, we’re going to check it out. I felt in the first half when I sprinted, I felt a twinge behind my knee, I played on.

“In the end, I can’t risk it for the team and I need to trust Joel. Hopefully it will be fine.”

Liverpool trail league leaders and champions Manchester City by a point and play Real Madrid in the Champions League final on May 28.