LUCAS TORREIRA will reportedly return to Arsenal this summer after Fiorentina refused to make his loan deal permanent.

Sky Italy claims Torreira looked set to continue in Florence after the Serie A giants agreed to meet his £75,000-a-week wage demands.

But a deal fell through due to Arsenal’s asking price, thought to be around £13million.

Torreira has just one year left on his Gunners contract.

And despite securing Europa Conference League football next season, Fiorentina informed Arsenal the price was too high.

It now leaves Torreira between a rock and a hard place, with the Uruguayan not thought to be in Mikel Arteta’s plans. 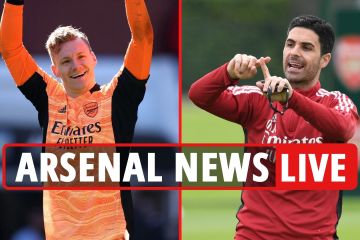 His No11 shirt was handed to Gabriel Martinelli this week.

And it prompted Torreira to joke on social media: “What number will I wear next year? Good luck amigo @gabriel.martinelli. I love you.”

The 26-year-old midfielder was touted for greatness when he joined Arsenal from Sampdoria in 2018.

But after citing home sickness, he ended moving to Atletico Madrid for the 2021/21 campaign.

Torreira failed to impress during 26 appearances, most of which came from the bench.

Yet he managed to rebuild his reputation at Fiorentina this term, scoring five times in 35 outings.

The Italians secured an impressive seventh-place finish in Serie A to secure European football for the first time since 2016.

And Torreira thought his long-future in Florence was virtually guaranteed.

But with just a year left on his Arsenal deal, Torreira may have to play the waiting game until he can agree a free transfer in 2023.

Previous articleHolly Holm ‘pretty upset’ with judges after split decision loss to Ketlen Vieira: ‘I truly felt in my heart that I won the fight’
Next articleMan Utd transfer target Frenkie de Jong ‘says goodbye to Barcelona fans’ with summer move on the cards