WHO writes this guy’s scripts?

It looked as though Erling Haaland was going to be upstaged by his close pal Jude Bellingham on his big night against his former club.

The Norwegian hot-shot had endured a frustrating night – well shackled by his ex-team-mates Mats Hummels and Niklas Sule.

But up with he popped with a trademark acrobatic volley six minutes from time to complete another memorable City fight-back.

John Stones was a far more unlikely hero, lashing home from the edge of the box to cancel out Bellingham’s opener.

However it’s hard to keep Haaland out of the headlines right now – and he gave Joao Cancelo’s delicious cross the finish it deserved.

That’s 13 goals in eight matches now in his fairytale start to life at the Etihad. He is going to take some stopping.

All eyes were on Haaland but he was not the only one with Dortmund connections.

Manuel Akanji was still on the books of the German club last month while skipper Ilkay Gundogan spent five years with them – and reached the 2013 Champions League final.

On the other side, US international Gio Reyna was a baby while his dad Claudio was the City captain.

Despite a shock 3-0 defeat to Leipzig on Saturday, the visitors looked confident right from the off.

Salih Ozcan curled a shot straight at Ederson while Blackburn striker Anthony Modeste was thwarted by Nathan Ake as he looked set to be in on goal.

City were in control of the game but struggling to make any openings.

Just about their only effort on goal in that period was a wild 30 yard strike for Joao Cancelo which sailed over the bar.

Record buy Jack Grealish was given a start for the second game in a row and a clever pass from Haaland created an opening for him.

He cut in from the left but shot straight at a defender and then frustratingly did the same again moments later.

On both occasions with a bit more awareness he could have passed with team-mates looking for it in the box.

Big things were expected of the former Villa skipper in his second season here – but the fans are still waiting for him to kick-start his career here.

Minutes later, a cross from Kevin de Bruyne was just behind Haaland – it had been that kind of half for City.

And the England ace gave a reminder of his quality as he broke up at City attack in his own area – then popped up in the other box a few seconds later.

He was denied by Rodri but it was a reminder of the 19-year-old’s threat.

The Dortmund fans in the South Stand at the Etihad spent much of the first half bouncing up and down – they barely stopped.

City, by comparison, had barely got going and no doubt Guardiola had a few harsh words for them at the break.

Pep had suggested pre-match that he was concerned about the proximity to Saturday’s lunchtime game at Wolves – and his team certainly played like it.

They could have found themselves behind within eight minutes of the re-start as Marco Reus skipped past his former team-mate Akanji on the left.

He put the ball onto his right foot and looked certain to score but curled his shot agonisingly wide of the post.

If that was a big let off for the English champs, it was only a brief reprieve as a corner from the right was only half cleared.

It dropped nicely for Reus who clipped a ball back into the middle and Bellingham got there first to nod past Ederson – who clearly hadn’t seen his run.

The youngster said on Tuesday night the whole of Birmingham would be supporting Dortmund.

And fans in the second city had more reason to cheer as ex Villa favourite Grealish was hauled off straight away as Guardiola had seen enough.

Gundogan and Riyad Mahrez were off too with Julian Alvarez, Phil Foden and Bernardo Silva all thrown on to replace them.

It certainly livened things up and Haaland finally got his chance, latching onto De Bruyne’s clever pass but striking his shot from a narrow angle against the outside of the post.

Keeper Alex Meyer probably had it covered and amazingly City had still not forced Dortmund’s second-choice keeper to make a save.

To be fair he had been superbly protected all night by centre-backs Hummels, and Sule.

And when they did finally put an effort on target, they equalised.

Stones took a touch on the edge of the box before fizzing a 20-yard shot which seemed to take Meyer – and everyone else by surprise – as it flew past his ear. 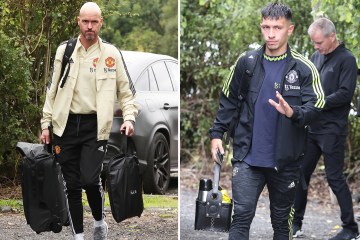 After stirring fight-backs against Newcastle and Crystal Palace recently, you almost knew what was coming

And sure enough, four minutes later there was Haaland – leaping to apply the finishing touch to Cancelo’s pass.

KL Rahul is one of the finest openers in...
NFTNews