MANCHESTER UNITED have opened talks with Barcelona in a £50million bid for Frenkie de Jong — as they issued a gushing farewell to £200m flop Paul Pogba.

Pogba departs Old Trafford as one of the costliest under-achievers in the club’s history.

Once wages and bonuses are added to his £89m club-record fee, United will have forked out more than £200m on the French World Cup winner.

The 29-year-old – who rejoined United in 2016 for his second spell at Old Trafford – is now expected to make a return to Juventus on a free transfer.

Paris Saint-Germain have also shown an interest, while SunSport revealed last month that United’s neighbours Man City were also weighing up a deal. 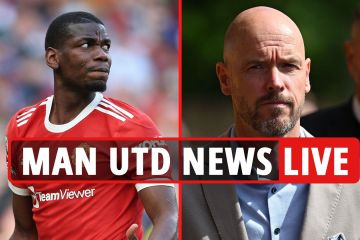 Pogba joined Jesse Lingard being confirmed as departing Old Trafford by United, who penned an 853-word statement for the French World Cup winner.

It said: “Everyone at the club would like to congratulate Paul on his successful career, and thank him for his contributions to Manchester United.”

Pogba said: “Many beautiful moments and memories but most importantly an unconditional support from the fans. Thank you.”

However the midfielder may need more persuading to leave than Barca do to let him go.

The financially-crippled Spanish club need to cut costs and boss Xavi us understood to be prepared to let the Dutch midfielder leave.

Yet De Jong, 25, said this week he still believes he is at his “dream” club and wants to stay.

Ten Hag is hopeful he can convince him to change his mind.

Barca will demand the £67m they paid Ajax in 2019, though United believe they can cut that asking price significantly.

Israel Adesanya is one of the most...