Eyewitnesses claim a mobile phone was sent flying to the ground as Ronaldo stormed off the Goodison Park pitch.

Footage of the incident was posted to Twitter, in which the 37-year-old appeared to knock something out of a fan’s hands.

And Sky Sports claim the club are now investigating into exactly what happened.

Ronaldo was visibly angry as he made his way off the pitch following the dismal loss at the hands of struggling Everton.

And the Manchester United star appeared to hit out at something as he made his way back to the away team dressing room. 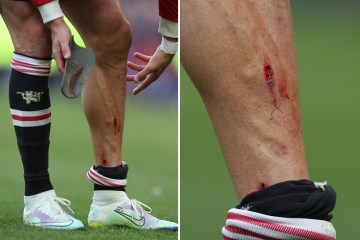 The Portuguese star hobbled off with his left sock rolled down, revealing two nasty cuts to his leg.

Footage of the tunnel clash shows Ronaldo carrying his shin pad in his left hand, but his right hand is just out of view as he saunters past the camera.

The striker struggled throughout the lacklustre defeat due to a lack of service from his team-mates.

He did however have a chance to level things up late on but was denied from close-range by Everton goalkeeper Jordan Pickford.

The full-time result was blasted by players and pundits alike, with Red Devils stopper David De Gea labelling the performance as “disgraceful”.

United have now lost three of their last five games, with Rangnick picking up just eight league victories from 17 games.

That’s a win percentage of 47 per cent, worse than any other United manager in Premier League history.