MANCHESTER UNITED have offered Casemiro the opportunity to DOUBLE his wages if he joins the club.

The Brazilian veteran has won a plethora of trophies with Los Blancos, including five Champions League titles.

But now the 30-year could leave behind his trophy-laden days in Madrid in favour of a far more lucrative contract at Old Trafford.

According to journalist Fernando Burgos, Casemiro has been offered the chance to go from five to £10million in salary over a five-year contract.

However, United are yet to submit an offer for the defensive midfielder. 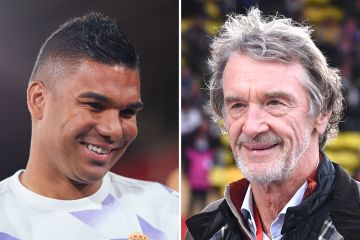 Previous reports have indicated Casemiro is ‘open’ to the transfer.

But Madrid value him at £50m, given his overall importance to the team.

The Red Devils interest in him was first reported when United football director John Murtough was present in Madrid to discuss a deal for Atletico Madrid star Joao Felix.

United have already seen a £110m bid for the attacker rejected, with his release clause at the Wanda Metropolitano set at a whopping £295m.

The season could not have gotten off to a worse start under Erik ten Hag, with an opening day defeat to Brighton followed up by a humiliating 4-0 loss to Brentford.

Up next for United are hated rivals Liverpool, and while Jurgen Klopp’s side are also winless in the Premier League so far, it is difficult to see United coming out of the game with anything based on the way they have played so far.

The game could also be marred by a mass boycott from fans, who are set to “#EmptyOldTrafford” in protest of the Glazer ownership.

Recent figures have revealed the Glazers have taken an estimated £1.1billion out of the club, excluding the sale of shares which would take this figure to £1.6bn.

However, the Glazer ownership of United could soon come to an end, with British billionaire Sir Jim Ratcliffe said to be interested in buying the club.

He is estimated to worth around £11bn and following the reports, United supporter’s group MUST released a statement saying they look forward to any prospective discussions.

PAUL SCHOLES has taken another shot at Manchester United...

BETH MEAD joked she prefers coffee when asked about...
NFTNews