ANTONY could become the tenth Brazilian to wear Manchester United’s famous colours when they take on Arsenal on Sunday.

The two Premier League rivals will meet in a 4.30pm kick-off at Old Trafford.

Both teams are on a rich run of form, with the visitors currently sat top of the Prem having won all five of their games played so far.

And Erik ten Hag is starting to get a tune out of his Man Utd squad.

The Red Devils have won their last three games in a row, firing themselves from rock bottom to fifth.

In a boost to Ten Hag, he’ll have ex-Ajax ace Antony at his disposal this weekend. 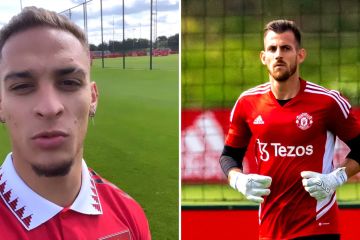 It has been claimed by a Relevo journalist, Antony will wear the No21 shirt for his new team.

Edinson Cavani wore the number last season after vacating the No7 shirt following the return of Cristiano Ronaldo.

Rafael da Silva and Ander Herrera also did battle in the shirt, and were adored by the fans.

Watford vs Sheffield United: Get £20 in FREE BETS when you stake £5 with Ladbrokes

‘It was my fault!’ – Mike Tyson says painkillers made him FALL ASLEEP during live interview with Piers Morgan