EVERTON and Manchester United fans are probably wondering why their Premier League match at Goodison on October 9 has been rescheduled for 7pm on a Sunday.

It was chosen as a TV game — but is later than normal because United will be playing in the Europa League on the Thursday night.

And this unusual kick-off time gives them a few more hours to prepare.

This falls in line with the Premier League guidelines that any Champions League team playing away on a Wednesday night will no longer have a Saturday lunchtime kick-off for a BT Sport match.

The situation has previously been an issue for Jurgen Klopp — but you can be guaranteed the Liverpool manager will find something else to moan about.

ALEX SCOTT has become a popular TV pundit and presenter for the BBC. 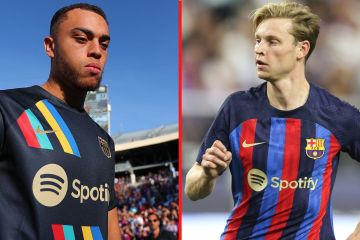 Her programme The Future of Women’s Football — which explores the explosion of the game in this country — is a decent watch.

And, with her career on the upward curve, she proved to be too expensive for Uefa when approached to host a three-hour launch for Euro 2022 at Old Trafford.

Uefa declined to shell out “a substantial sum” for her to front the event in a stadium suite for media and dignitaries.

There was also frustration at the BBC that Scott, and other well-known pundits, were not featuring enough on the broadcaster’s TV and radio news channels during the group stage to help plug the tournament.

Meanwhile, the BBC gets plenty of stick in athletics for having cheerleaders involved in their coverage.

Yet during games, former keeper Rachel Brown-Finnis was seen in the media areas wearing an England shirt.

ARSENAL will be in the spotlight when Amazon Prime launches its latest All or Nothing documentary tomorrow.

Club legend Thierry Henry has given his opinions.

But some of the first team are unhappy about that, believing he has been too critical over the last season or so.

According to Patrice Evra, Henry once refused to watch them on TV because Granit Xhaka was captain.

SPURS, West Ham, Norwich and Blackburn all headed north of the border for pre-season friendlies in Scotland.

Many supporters found it is impossible to buy a beer before matches.

Incredibly, the last time you could purchase alcohol at a game in any of the four Scottish divisions was in . . . 1980.

And you thought English fans could not be trusted to behave.

Ryan Giggs ‘demanded sex every other day, treated me like his HOUSEMAID & moaned about how I loaded dishwasher’, says ex

Ryan Giggs ‘demanded sex every other day, treated me like his HOUSEMAID & moaned about how I loaded dishwasher’, says ex

RYAN Giggs treated his ex-girlfriend "like a maid" and...

PARIS SAINT-GERMAIN are demanding £17million to sell Leandro Paredes. With...

ARSENAL have seen a bid for Fiorentina centre-back Nikola...