FOR a second day running, a procession swept through Mexico City.

On Saturday night it was the hour-long parade of floats and dancers for the spectacular día de los Muertos – or day of the dead – celebrations.

And on Sunday it was Max Verstappen’s turn as he coasted to an easy victory to set a new Formula One record for winning 14 races in a season.

He said over the team’s radio: “Amazing guys, 14 wins in a season, unbelievable.”

And the Dutchman later added: “Of course the start helped me out a lot.

“We were also on a different strategy to the other cars around us but again, an incredible result. 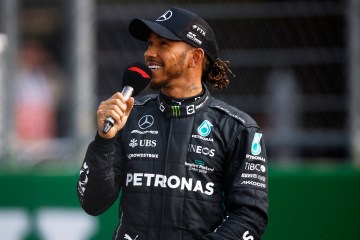 “The pace of the car was really nice. We had to look after our tyres because it was a really long stint on the mediums but we made it work.

Boss Christian Horner said: “Well done mate, that is a new record. That is the most race wins we have had in a season.”

Not that Sky F1 viewers would hear too much about it afterwards, given that Verstappen and his Red Bull team snubbed the broadcaster over a row centering on the channel’s roving reporter, Ted Kravitz.

Contrary to some views, the feud was not a reaction to Sky’s presentation of Red Bull’s cost-cap breach.

But is the culmination of what the F1 team feel has been on-going sniping from Kravitz in the wake of last year’s Abu Dhabi GP.

The final straw was last weekend when Kravitz implied Hamilton had been “robbed” of last year’s title in a bumbling chat about a potential Hollywood script for Brad Pitt, who is making an F1 film.

When asked by SunSport, Sky declined to comment while Red Bull say the ban is indefinite as they clearly feel the broadcaster has some making up to do.

The fallout between the two was in truth more spectacular than this race.

Sure, its capacity and colourful crowd made this event, but this was a comfortable win for Verstappen as Lewis Hamilton was unable to mount a serious threat and finished in second place, some 15 seconds behind.

Verstappen got a good start, as did Hamilton who was able to squeeze past George Russell on the first lap.

Russell was then passed by Serio Perez as the home favourite was able to make up a place from his fourth-slot on the grid.

But we were denied the tantalising prospect of seeing Hamilton slug it out with pole-sitter Verstappen, who was just too quick on the soft tyre.

The Red Bull man was maintaining his gap to Hamilton until he stopped for fresh tyres at the end of lap 25.

His pitstop was quick at 2.5 seconds, unlike Perez, who had to wait twice as long for his pitstop on the previous lap.

That promoted Hamilton into the lead as Verstappen’s stop dropped him to third behind Russell.

But his time out in front did not last long, as he stopped himself at the end of lap 30.

And when Russell made his pitstop on lap 37, it was Verstappen who was leading again with Hamilton second, Perez third and Russell in fourth.

It remained that way until the end with Russell pitting on the penultimate lap for fresh tyres as he was able to set the fastest lap and snatch a bonus point.

While Ferrari were left as the best-of-the-rest once again, as the Italian team failed to impress with Carlos Sainz and Charles Leclerc in fifth and sixth place respectively.

Meanwhile, Hamilton has been told he has a job at Mercedes for life by Wolff.

The Mercedes ace, 37, will start to open talks over a new deal with the team to remain in F1 after 2023.

He already has a contract in place for next season, worth £40million a season, but he is looking to prolong his F1 career into his 40s.Wolff said: “It is 100 percent his [Lewis’] seat,” when asked if he was looking at other drivers for beyond 2023.

He added: “We haven’t started any talks. We want to definitely finish the season and then find some quiet time over the winter like we did last time around.

“He’s much more than a driver to us now.

“And although we’re not talking about a career end, it’s also important to speak about his role as an ambassador for Mercedes and the many sponsors we have and the implication he can have in our wider universe.”

Everton vs Nottm Forest: Get money back as CASH if you lose, plus 164/1 tips, preview and prediction – 18+ T&Cs apply