RED BULL chief Helmut Marko has admitted that Formula One world champion Max Verstappen is a “time bomb” who could go off if they “don’t win again soon.”

The Dutchman has endured a tough start to the 2022 season, failing to finish in two of the three races so far.

Despite Verstappen having a fast car to stage a title defence, reliability problems have seen him drop 46 behind drivers championship leader Charles Leclerc.

The faults cost the 24-year-old 36 points, despite winning the second race in Saudi Arabia.

And Red Bull chief Marko has admitted that the team needs to win again soon to avoid “time bomb” Verstappen going off.

He told Austria’s ORF: “With the set-up of the car, you sometimes lack the confidence to maintain his [Verstappen’s] extreme driving style. 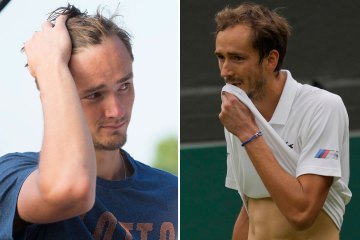 “You can see that this makes Checo [Perez] closer to him than in the past.

“If we don’t win again soon, then he is indeed a time bomb!”

Despite his previous outbursts, £40million-a-year Verstappen is “a lot calmer”, according to Marko.

Verstappen has been part of the Red Bull F1 programme since making his debut with the team’s sister outfit Toro Rosso in 2015.

Marko continued: “He is a lot calmer.

“After his retirement, he returned to the pit box and we discussed things calmly.

“However, in this case, we knew we could run into that problem, because we also had to deal with that in qualifying, so it didn’t come out of the blue in that regard.

“He is an emotional and passionate driver who will always give his opinion.

Verstappen will be hoping this weekend’s race in Imola can kick-start his season and get his title defence back on track.

Football fans feel Real Madrid superstar Karim Benzema has one hand on the 2022 Ballon d'Or after winning the...
AEW