BRYSON DECHAMBEAU and the stunning Lilia Schneider are now a couple, according to reports.

The golf ace, 29, is said to be dating the sophomore University student who also plays.

US outlet OutKick report that ex-girlfriend Hunter Nugent confirmed that DeChambeau had moved.

And they claim Schneider has a chance to become ‘the next great Instagram golf influencer’ like Paige Spiranac.

She is coming from a freshman season at at Marian University in Indianapolis where Schneider played in just one tournament and shot a 176 over 36 holes.

Her game should improve from coaching tips from new fella DeChambeau. 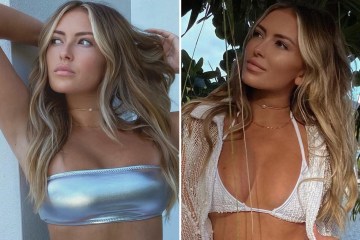 With her social media full of golf coaching videos and bikini shots, Schneider is following in the footsteps of Spiranac.

However the two may not see eye-to-eye on DeChambeau.

This week, she laughed after he was “almost decapitated” in a farcical Chicago rope episode.

And she sarcastically labelled “tough as nails” DeChambeau an “inspiration” for “persevering” to come joint eighth at the LIV event in Chicago.

The college golfer Schneider won’t mind too much though, as she follows in Spiranac’s footsteps.

She told her TikTok followers in 2021 : “I used to be very insecure and hate my body.

“So I decided to do something about it.”