NICO SCHULZ may be a defender by trade, but that has not stopped him from scoring a great goal off the pitch.

Following her split from Pitt, who is set to star in a film produced by Lewis Hamilton’s new company, Nicole has revealed herself to be dating Schulz in recent months.

As reported by the Daily Star, it is unknown when Nicole and Schulz first made each other’s acquaintance.

However, they became an official couple back in March.

And they appeared to be deeply smitten with each other over the summer with pics of their holiday to Greece a recurring feature on her feed. 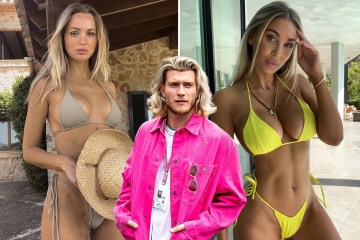 The fashion model has an Instagram following of 214,000 and loves to pose in teasing snaps.

Many such pics see her donning skimpy outfits and lingerie sets.

Nicole, 29, grabbed the headlines in Schulz’s native Germany recently with a striking outfit at the Tribute for Bambi.

The Pole was first linked with Hollywood star Pitt in late 2020.

The pair met at the 2019 premiere for Once Upon A Time in Hollywood, with them being snapped a year later while at Pitt’s French Chateau.

But the relationship never really took off, with a close source to the couple saying: “It was never all that serious as it was cracked up to be.”