LOGAN PAUL usually keeps his relationships private – but he has admitted to having problems with KISSING girlfriend Nina Agdal due to a gurgling noise in his throat.

And the pair have been spotted together a number of times, whether it be holidaying in Greece or taking a run in London.

Nina, 30, is the ex of Hollywood megastar Leonardo DiCaprio, who she dated for a year.

But despite usually keeping details of his relationships a secret, Paul has admitted to having intimacy problems with his new model girlfriend.

Paul says a gurgling noise in his throat makes him “pull back” when KISSING Nina and it happens “an uncomfortable amount of times”. 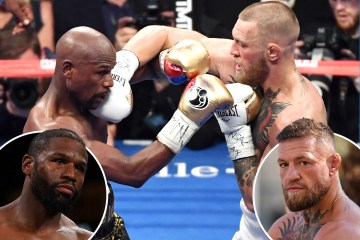 He said on his Impaulsive podcast: “It wasn’t quite, (gurgles) excuse me.

“So that happens to my throat from time to time. It’s become a huge sticking point in my relationship.

“I’ll be kissing my girlfriend and I’ll pull back, and I won’t move my mouth and you’ll hear (makes a gurgling noise).”

He added: “But it happens an uncomfortable amount of times.”

Paul is incredibly wealthy and has his fingerprints all over a number of money-making ideas.

And he is even tearing it up as a wrestler for WWE.

It’s only set to be Paul’s third match in pro wrestling but he has earned it with his stunning displays so far.

According to Celebrity Net Worth, Nina is worth an eye-watering £10.5million.

Nina often posts her jet-setting adventures to her Instagram page.

She also isn’t shy to set pulses racing with some revealing pictures.