WHETHER it’s from headlining UFC cards or through his Proper No 12 Whiskey, Conor McGregor has made millions in his career.

He is no stranger to flashing the cash through his collection of stunning watches or his array of fancy yachts.

But the Irishman has showed no matter how much money people make, the love for a bargain never goes away.

McGregor, 34, posted a picture to Instagram of himself lounging on the sofa at home with sons Conor Jr, five and Rian, one.

And the Notorious was seen sipping his morning coffee in the snap from a bargain £2.50 mug.

UFC icon McGregor enjoyed a hot drink out of a mug bought from Irish budget retailer Dunnes Stores, according to the Irish Mirror. 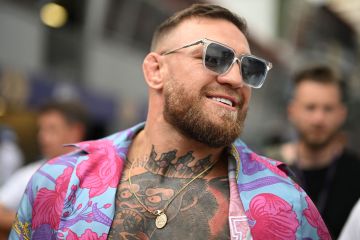 McGregor’s mug had a personalised “C” for Conor on it so his young family know to keep their hands off it.

Conor Jr is McGregor’s eldest child at five years old – having been born shortly before his dad’s bout with Floyd Mayweather.

McGregor is currently gearing up for a return to the octagon after recovering from the horrific leg break he suffered last year.

The Irishman broke his tibia during his trilogy bout with Dustin Poirier at UFC 264 in Las Vegas.

A mouthwatering trilogy fight against bitter rival Nate Diaz has been rumoured in recent days.