MMA prospect Dakota Ditcheva has a home away from home in Florida – but still inspired by England’s Lionesses and boxing heroes.

Ditcheva, a world champion in Muay Thai, moved out to Coconut Creek this year to train at the world-famous American Top Team.

But the Professional Fighters League star recently returned home to watch the super-fight between Claressa Shields and Savannah Marshall.

Marshall, beaten on points, walked to the ring with Jill Scott, who helped the Lionesses to Euro glory in the summer.

And it left Ditcheva, 23, full of motivation after a monumental year for women’s sport. 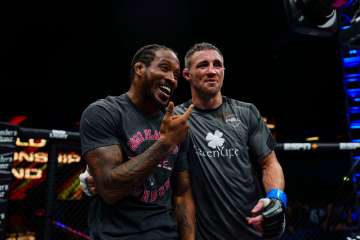 She said: “I went to the Shields vs Marshall fight in London the other week, to see an all-female card like that was just massive.

“I’m really excited to be apart of the growth for females in sport, I feel like we are setting an example now.

“The England women’s win the football and the all-female card in boxing, I feel like this is a big time to be apart of it so I’m proud of it.”

Ditcheva this year signed for the PFL, MMA’s only league format, and beat Hassna Gaber in her promotional debut in August.

PFL fighters compete in a two-bout regular season, with points earned per method of victory.

It paves the way for the top four in each weight to progress to the knockout stages, where a $1m winner-take-all finale fight awaits.

Ditcheva returns in an undercard bout of this year’s championship showpiece in New York, before eyeing her own run in a future season.

The flyweight was first trained by her kickboxing world championship mum Lisa Howarth, at their family gym.

But she left the comforts of her home gym in Cheshire to join ATT, home to the likes of UFC pair Jorge Masvidal, 37, and Dustin Poirier, 33.

Ditcheva said: “It’s a good vibe over here, I absolutely love it.

“This is the bit that I’m missing at home, the girls to wrestle with as the level of wrestling and jiu-jitsu here is a lot higher and it’s something that I’ve missed a lot in my game.

“To be able to come over here and work on that again, it feels like I’m in the right place not just mentally but physically.”

She added: “One of the most important things I look for when going to a gym is that it feels like home.

“Having my mum as my coach and training out of her gym for so long, I feel like I look for that everywhere I go.

“I need that feeling when I go to somewhere new and I feel like I got that here.”

Jake Paul ready to ‘move on to the next one’ if Tommy Fury can’t resolve visa issues, takes shot at Tyson Fury