MUHAMMAD MOKAEV admits it’d be an honour to bring the UFC back to his adopted hometown of Manchester.

The surging flyweight contender has called Manchester home for the best part of ten years after leaving Russia with his father as a refugee.

Manchester used to be a regular port of call for mixed martial arts premier promotion but hasn’t hosted an event in nearly six years.

But Mokaev, 22, hopes to change that within the next two years – in which he plans to fulfil his dream of becoming the youngest champion in UFC history.

The three-time IMMAF gold medallist told SunSport: “It’s very possible. Because in March 2024, that is my deadline to become the youngest champion in UFC history.

“And in March time, the UFC comes to the UK usually, right? So maybe UFC Manchester will be back then.” 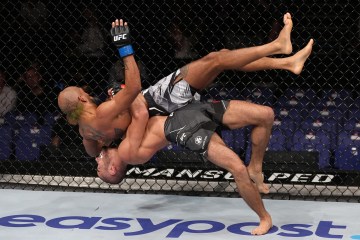 Mokaev would happily make do with sharing a Manchester card with fellow surging Brit Tom Aspinall – who he’s known for close to a decade.

He said of the injured heavyweight contender: “A man like Tom Aspinall is a great example and a great role model for British people – especially those who are born here.

“I think Tom is the biggest role model at the moment. I myself look up to Tom. And if he were to be the main event here, I would love to fight on this card with him.”

A headlining spot could come soon for Mokaev given his immense popularity and early form in the promotion.

The Punisher has made quite the splash in his two outings in MMA’s top league.

Mokaev blew the roof off London’s O2 Arena in March with a stunning 58-second submission of Cody Durden.

Mokaev said of his latest triumph: “I feel good about the fight, especially having three rounds of cage time in my octagon career.

“I wanted this. I said in interviews before the fight that I really wanted that because I’ve had a long amateur career before.

“I think I learned a lot more from my three-round fight than I did in my one-round fight.”

“For me, it was interesting. I know it was boring for some people.

“Sometimes I watch it back and I like, Hey, come on, move. What are you doing? Why are you staying on the back for so long?’

Mokaev’s decision not to throw caution to the wind and go for another sensational finish was in order not to take any unnecessary risks.

“But I don’t want to take one punch, a risky punch, and get damaged and maybe be out for one year. I have a bigger goal than beating him in the first round.”

Setting the new record of youngest champion in UFC history – which is currently held by Jon Jones – will be no easy feat given the murderers’ row of killers in the flyweight division.

But Manchester’s adopted son doesn’t believe it’ll be long before he’s in contention for a crack at the 125lb strap.

He said: “I believe in the flyweight division, I think it’ll be four fights and I’ll fight for the title. So I need two more fights.

“But the main thing is publicity. I need to get lots of people behind me, that’s what the UFC wants to see.”

And judging from a post-fight interaction with a fan, Mokaev won’t have any trouble drumming up interest when he cracks the flyweight top-15.

He said: “Even though I had a three-round boring fight, people still talk about me.

“One guy said yesterday, ‘Your interview with boring.’

“And I said, ‘My fight was boring. You shouldn’t have turned anything on. Why watch my interview?’