NOVAK DJOKOVIC was in a relaxed mood as he shared a joke with Nick Kyrgios’ girlfriend Costeen Hatzi earlier today.

The Serbian will take on Kyrgios on Centre Court tomorrow after overcoming Brit Cameron Norrie in four sets yesterday.

Djokovic, 35, is aiming to win his SEVENTH Wimbledon title on Sunday, but doesn’t appear to be feeling the pressure.

He checked in to the All-England Club earlier today for a practice session, and didn’t go out of his way to avoid his final opponent.

In fact, Djokovic could be seen laughing and joking while walking past Kyrgios’ own session.

The Aussie’s girlfriend Costeen wore a big grin as Djokovic strolled by. 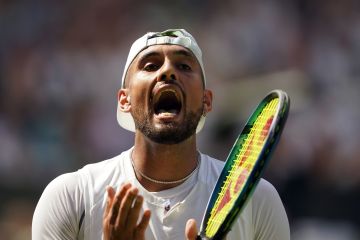 Kyrgios, 27, yesterday admitted he struggled to sleep after Rafael Nadal’s withdrawal handed him a place in the Wimbledon final.

He told reporters: “I had a shocking sleep last night. I probably got an hour’s sleep just with everything, like the excitement.

“I had so much anxiety, I was already feeling so nervous, and I don’t feel nervous usually.

“I feel like I’m just a reckless ball of energy right now. I just want to go out on the practice court now and hit some tennis balls. I want it to come already. Yeah, I want the final to come already.”

Wag Costeen has helped Kyrgios stay relaxed throughout the tournament.

The pair were seen sharing a cuddle on the practice court this week, after Kyrgios was accused of bringing tennis “to the lowest level” by former Wimbledon champ and his fellow Aussie Pat Cash.

The duo previously endured a frosty relationship, with Kyrgios labelling the 20-time major winner “cringeworthy” in 2019.

But following Djokovic’s deportation from Australia in January, the two have developed an unlikely rapport.

Kyrgios described their relationship this week, saying: “We definitely have a bit of a bromance now, which is weird.

“I think everyone knows there was no love lost for a while there.

“I think it was healthy for the sport. I think every time we played each other, there was hype around it. It was interesting for the media, the people watching, all that.

“I felt like I was almost the only player and someone to stand up for him with all that drama at the Australian Open.

“I feel like that’s where respect is kind of earned. Not on the tennis court, but I feel like when a real-life crisis is happening and someone stands up for you.

“We actually message each other on DMs in Instagram now and stuff. It’s real weird. Actually, earlier in the week, he was like ‘hopefully I’ll see you Sunday’.”

CHELSEA will play hardball with Manchester United over Christian...
NFTNews