OLEKSANDR USYK jokingly labelled Tyson Fury a “drunkard” as he called his rival out for a world title unification fight.

Usyk stepped up his taunting of the fellow unbeaten heavyweight when demanding they settle “who is the best in the world”.

But the Ukrainian’s cheeky comment about drinking is at odds with Fury’s effort to overcome a string of personal problems.

The Brit even said he went teetotal for a while after a spell of downing up to 12 pints a day – as he tackled mental health issues.

And in fact 34-year-old Fury has been praised for his openness over his previous issues – because it’s encouraged others to seek help. 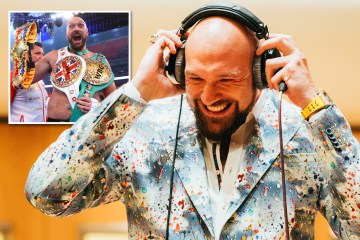 “Let’s make a present to the boxing fans.

It comes after Anthony Joshua’s two-time conqueror Usyk urged Deontay Wilder to take him on – once he “gets rid” of Fury.

The Gypsy King launches his comeback when he seeks a third win over Derek Chisora at the Tottenham Hotspur Stadium on December 3.

And Fury claims he could have another TEN fights in him.

He told talkSPORT: “I had retirement for four/five months and I didn’t like how it tasted.

“The only thing that gets me going is boxing.”