PAIGE SPIRANAC has revealed that her worst moment of fame came when she spotted men taking videos of her while at a wedding.

The professional golfer spoke of the incident during a recent interview in which she admitted that the “lack of privacy” she received made her scared to leave her home.

She told BetSperts.com: “Stalkers, blackmail, lack of privacy. I went through a stretch this year where I was afraid to leave my house and was quite uncomfortable going in public.

“I didn’t feel like I could live a normal life anymore. I went to a wedding after a stressful work trip and wanted to let loose.

“I was pounding some shots and having a great time until I noticed 4 guys videotaping me and taking pictures.”

Although this was not the only thing that she did not like about being famous, as she also said that some of the traveling she has to do can be “draining”. 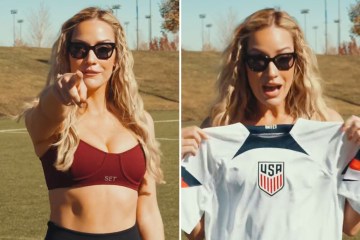 Spiranac also said that the “hate” she receives has made her go to a therapist.

She added: “Traveling. It’s the best and also one of the worst.

“Traveling is draining and this year I’ve spent so much time on the plane. It’s hard living out of a suitcase and never feeling settled.

“The hate. I’m a public figure which means anyone can comment on every aspect of my life, my opinions, my content, and my body.

“I’ve developed some thick skin and spent so much money on therapy to help me cope.

“I’m used to it now but there are times that it’s pretty intense where it will still get to me.”

She recently showed off the USA’s new kit ahead of their World Cup clash with England in Qatar, while also stripping down to her bra.

Carabao Cup third-round draw in full: Chelsea to travel to Man City in huge clash as Man Utd get Aston Villa at home

England vs Germany – football FREE BETS: Get £30 bonus to spend on Sunday’s Euro 2022 final with Parimatch