PAIGE SPIRANAC had fans on the edge of their seats as she teased her next Halloween costume.

The former golfer, 29, has accrued a large army of followers on social media.

And Spiranac, who was crowned the “sexiest woman alive”, teased them about a future look with a throwback post to her Halloween outfit last year.

She posted a pic of her 2021 Harley Quinn cosplay paired with a teasing caption.

It read: “Last year’s Halloween costume was good but this year is even better. Who do you think I’m dressing up as?”

And fans wagered a few guesses in answer to the question. 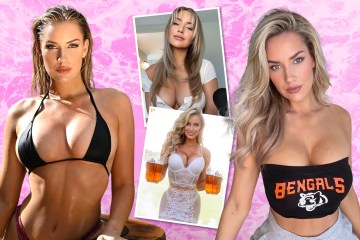 Others thought she may switch over to Marvel heroine Black Widow.

However, some users were too stunned to make a guess.

“Wow,” said one user, while a second added: “Whatever it’s going to be you’ll be the most smok’in hot chick wearing it.”

The golf influencer recently released a calendar, which is set to boost her £3.1million portfolio.

The blonde bombshell has amassed this fortune through a variety of means, and the more than 4.2 million followers she has across Instagram and Twitter mean she has the fanbase to back it up.

Arsenal, Chelsea and Man Utd’s Europa and Champions League fixtures out with Battle of Britain double header for Klopp