The first sees VanZant in a brown swimwear outfit in front of some trees and the second shows her in an even smaller blue bikini with a denim jacket.

VanZant has 3.2million followers on social media and her fans went crazy for the post.

One said: “Unreal! Such a goddess.” 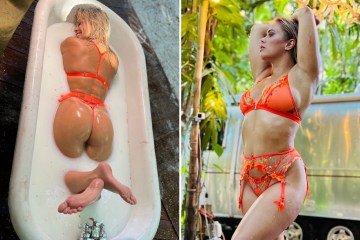 And a third commented: “This is incredible.”

It’s not the first time VanZant has wowed fans in recent days after posting a Halloween snap of her and husband Austin Vanderford dressed up in a prisoner and police costume.

She also recently posed in a bathtub while trying out some new underwear and went bra-less in a shirt.

The fighter was in the UFC for seven years before leaving in 2020.

She is now signed to Bare Knuckle Fighting Championship as a boxer and All Elite Wrestling.

But since joining AEW she is yet to perform in a singles bout, only in a trios match.

VanZant also has an OnlyFans account which is known for it’s racy uploads.

‘Do you want to go to war?’ – Conor McGregor hits out at Michael Bisping and tells UFC legend ‘I’ll cave your head in’

Aljamain Sterling on Sean O’Malley as a potential title contender in the future: “If I’m being honest, that guy’s really f******* good’