PAIGE VANZANT posed in nothing but orange underwear on Instagram just days after announcing OnlyFans move.

The ex-UFC star uploaded the snap on social media with the caption: “Damn, I love orange.”

It came after VanZant announced her move onto subscription-based website OnlyFans.

VanZant is preparing for a return to Bare Knuckle Fighting Championship.

However, the American left fans impressed with her workout routine. 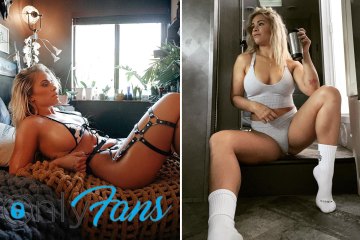 VanZant – who SunSport revealed is set to star in her first movie role – is set to fight again in Denver this October.

She was due to clash with fellow MMA fighter Charis Sigala in the co-main event of BKFC’s London debut in August but the fight was cancelled.

VanZant took to Instagram to clear up the situation, claiming the cancellation was not her doing.

The part-time wrestler said on Instagram: “I did not pull [out] from my fight!!!! I was pulled!

“I worked my f***ing ass off to be pulled a week before I am supposed to compete.”

In a later interview with MMA Fighting VanZant added: “I was frustrated with the way the whole situation was handled.

“They pulled me like three or four days before Austin’s fight.

“I don’t know if the timeline is important to anybody, but they pulled me.

“I will say they’re treating me really well and they’re compensating me for the situation.”