PAIGE VANZANT wowed in a sexy police outfit for a Halloween bash.

She coordinated costumes with husband and fellow MMA ace Austin Vanderford, who dressed as a ‘convict’ in prisoner overalls.

Ex-UFC fighter VanZant, 28, posted pictured to her 3.2million Instagram followers of herself pretending to arrest Vanderford

She captioned the post: “He got stopped by a lady cop.”

VanZant stunned in a revealing zip up top and skintight trousers that showed off her figure. 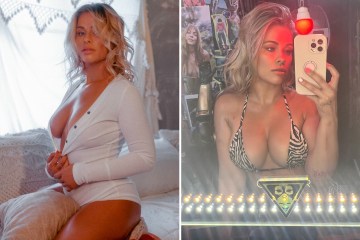 And her costume came complete with handcuffs and walkie-talkies, plus a police hat and gloves.

Vanderford meanwhile donned orange overalls as he was ‘arrested’ by VanZant.

The pair headed to a Halloween party, and VanZant captioned another Insta post: “And all she want me to do is f^** the police.”

Earlier this week the BKFC star sent fans wild as she posed in an open white shirt.

She also recently enjoyed herself in a hot tub, where she treated fans with more pictures on social media.

After leaving the UFC in 2020, VanZant has lost both of her opening BKFC bouts.

VanZant joined wrestling promotion AEW back in March, but is yet to make her debut for the company.