The attacking midfielder, 28, officially left Juventus on a free transfer at the end of June.

Reports linked him with a move to Inter Milan but a deal has still not been struck with the Serie A giants in a difficult financial situation.

Inter will first need to offload stars such as Alexis Sanchez before they can attract Dybala.

That has opened up the chance for a Premier League club to land Dybala and United are said to be ahead of Arsenal in the race to sign the Argentine, report Corriere dello Sport via Sport Witness.

United are long-term admirers of Dybala and it has been claimed the club will want another superstar if they sell Ronaldo amid links to Chelsea. 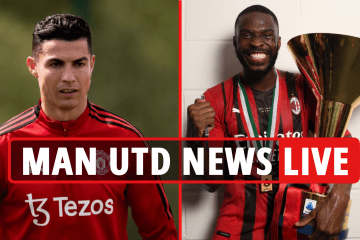 But Arsenal are also in contention to sign Dybala and have reportedly been in contact with his agent in a bid to lure him to North London.

Dybala is thought to want to stay in Italy and there is certainly no shortage of interest.

Roma, AC Milan and Napoli have also been credited with interest but no approach has been made for the playmaker so far.

That is why the South American’s representatives are trying to strike up interest in their client in England.

And United could focus their attention on Dybala if their efforts to sign Antony end in vein.

The Red Devils bid £51million for the Brazilian winger but Ajax want £70m – a price that has not put off Erik ten Hag.

LUKE ROCKHOLD plans to take the "soul" of top...

JIM RATCLIFFE will be among the Premier League's richest...
NFTNews