MAYBE Manchester City fans did not believe Pep Guardiola when he said his team were in ‘big trouble’ on Wednesday night.

By the time the team-sheet dropped at Wembley yesterday, the reality must have dawned on them.

Only four of those who started in the Wanda Metropolitano survived for a second meeting with Liverpool in the space of seven days.

A back four who had never played together before, Fernandinho — who turns 37 next month — in the middle of the park and his second-choice keeper Zack Steffen.

The City boss must have feared deep down it would be a tough day for a team largely made up of understudies.

Probably not as tough as that first half ended up being, admittedly.
His team have not had such a traumatic opening 45 minutes in four years. 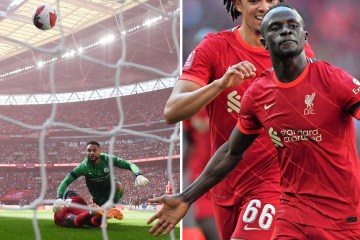 Ironically that last one also came against Liverpool — in the first leg of the 2018 Champions League quarter- final at a pumped up Anfield.

Against many teams in the Prem — and even plenty in Europe — the side Pep sent out would have had a chance.

But up against a Liverpool side hunting a quadruple, it always looked like it would come up short.

Nobody can criticise Guardiola too much. More than any other manager he has respected the domestic cup competitions in his six years in England.

Four Carabao Cups in a row and this competition in 2019 are proof the Catalan has always given it his best shot.

One quick glance at his CV shows how much he loves any piece of silverware. However, he clearly decided something had to give as his team also chase glory in both the Prem and Europe — and the FA Cup was it.

Pep waited until the 83rd minute to make a sub — when top scorer Riyad Mahrez was thrown on.

The lack of urgency they showed as they chased a two-goal deficit in the final ten minutes was surprising.

Even when they got it back to 3-2 with four minutes of added time left, no more replacements were thrown on.

That tells you he was not willing to risk Kevin de Bruyne or his other rested stars with crucial games ahead.

Jurgen Klopp’s men smelt blood right from the first minute and were never going to let City off the hook.

The Kop chief had the luxury of resting several of his own star men as they completed the job against Benfica.

Guardiola had no such luck with their tie against Atletico Madrid hanging in the balance.

He needed all his top men to roll up their sleeves for a ferocious battle with Diego Simeone’s street-fighters.

And there were signs during that chaotic second half in the Wanda  that City were starting to creak.

They paid a high price for coming through that — both physically and mentally — and Guardiola knew it. Kyle Walker’s injury meant he was left out for this one while star man De Bruyne was only fit to be on the bench.

With  Prem games against Brighton and Watford looming and Liverpool so hot on their heels in the race for the title, they have no margin for error.

Had City not let their rivals off the hook last Sunday and given themselves some wriggle room at the top, it could have been different.

Pep will take heart from a much-improved second half display by his team — which almost produced a sensational and unlikely comeback.

But for Steffen’s clanger, which gifted the Reds a second goal in the 17th minute, his gamble could have paid off.

That moment — when the keeper stretched in vain to keep out Sadio Mane’s second just before half-time — will almost certainly still be playing on the American’s mind.

Jack Grealish pulled one back and Gabriel Jesus missed a couple of golden chances before Bernardo Silva tapped in their second. But in the end it was too little too late.

Some fans who made the long and difficult trip to London might feel disappointed with the selection and tactics.

Their manager made it clear where his priorities lay. They will have to trust he has made the right call.

If City can win the Prem and perhaps the Champions League too, this will be quickly forgotten, of course.

But should they end up empty-handed with bitter rivals Liverpool walking off with a quadruple then Guardiola might be left to rue the way he approached this one.