RIO FERDINAND is worried about what’s going on behind the scenes at Manchester United – in particular with Marcus Rashford.

The England international has fallen down the pecking order in recent weeks and has had to make do with a spot on the bench – although he did start in the Red Devils’ 1-0 defeat to Everton on Saturday afternoon.

Rashford has cut a dejected figure when he has taken to the pitch and his body language hasn’t gone unnoticed by club legend Ferdinand.

Speaking ahead of United’s Premier League clash with Everton, Ferdinand told BT Sport: “He’s left me worried and I’m asking a lot of questions about what is going on behind the scenes.

“Slumped shoulders, not as confident.

“When he burst onto the scene you thought, ‘Oh my god this kid is a player’. I think it stems from the uncertainty of the football club. 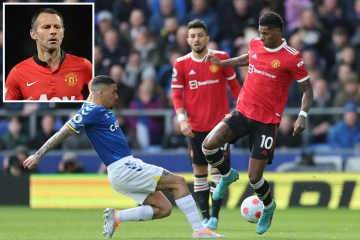 “He’s a local boy, who is desperate for this football club to do well.

“He grew up on success, it’s all he saw. It’s deception as a football player that you hide what you’re really feeling.

“I don’t think he can hide it through his body language. He wants some success back at the club. The uncertainty with the manager and his contract.

“When he’s played he’s been out of position and not played as much as he wants under this manager.

“All those things mean you can understand why he’s like that, but as a player with experience, sometimes you need to put on a show for people that might not reflect how you feel at that time.”

Rashford, 24, has had a poor season by his standards, finding the back of the net a mere five times in 27 appearances in all competitions.

Ferdinand said of the struggling striker: “His talent is there, but it’s about getting back to the levels we know he can reach and moving above those.

“What comes with great work and the amount of spotlight he’s been under, is more pressure.

“It’s a bigger spotlight, the responsibility then falls on your shoulders and for a young lad, it’s hard to accept that responsibility.

“Did he anticipate that? Probably not, because things were going so well at the time.

“Like it or not, that’s what comes with this type of situation.

“When you stand for good and make people in higher positions that yourself look silly by making change and impact on people, you get held to a different level.

“He’ll have to deal with that for the rest of his career.”

Rashford and his Manchester United team-mates will be back in action next Saturday, welcoming relegation battlers Norwich to Old Trafford.