ROBERT LEWANDOWSKI has reportedly agreed a three-year contract with Barcelona.

The Pole has been linked with a move to the Nou Camp after snubbing a new deal at Bayern Munich.

He still has a year to run on his existing agreement with the Bundesliga side but they have now confirmed that the forward wants to leave them.

The Times state that Lewandowski is set to join Barcelona.

And they report that he has verbally agreed to sign a three-year contract with them.

Now all that remains is for them to thrash out a transfer fee for him. 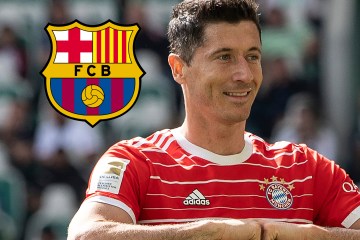 Confirming that Lewandowski, who has scored 49 goals for the club this term, wants to go, Bayern’s sporting director Hasan Salihamidzic told Sky Germany: “I spoke with Lewa.

“In that discussion he informed me that he does not want to accept our offer to extend the contract and that he would like to leave the club.

“He said he wants to do something else. But our position has not changed.

Barca boss Xavi was recently asked if he would be willing to recruit veterans this summer amid links with the 33-year-old.

He replied: “It’s not age, it’s performance. Players take care of themselves so much and every year they are more professional.

“Ibrahimovic, Modric, Dani Alves, they all have a very high performance at important clubs.“Cristiano and Messi too. Age is not a priority. If it improves us, that’s the important thing.”

CHELSEA are interested in signing RB Leipzig star Christopher Nkunku but will need to sell attackers first, according to...
Cricket